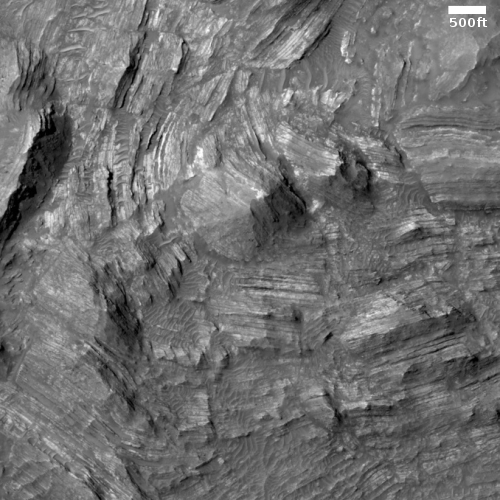 Cool image time! The photo to the right, rotated cropped, and reduced to post here, is only a small example of the strangely tilted and twisted strata in the central peak region of 38-mile-wide Martin Crater on Mars. The full image shows more.

The picture was taken on January 12, 2021 by the high resolution camera on Mars Reconnaissance Orbiter (MRO). The section I’ve cropped out shows a series of stratified strata that are are not only significantly tipped from the horizontal, but have also been bent and deformed.

The crater itself is located about 260 miles south of Valles Marineris, as shown on the overview map below. 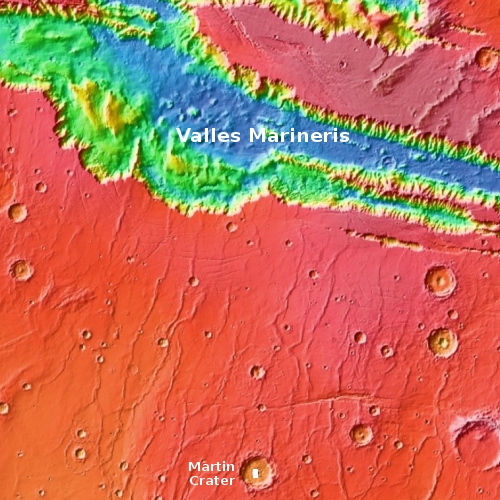 The white box in Martin Crater indicates the location of the above photo. It covers most of the central peak of this crater.

What caused these bedding planes to get tilted and twisted as we see them? And were they shaped this way before or after the impact that created the crater? The two features in the overview map that make me think these strata existed this way before the impact are the various north-south trending ridges and east-west cracks seen throughout this region. They suggest that this plateau south of Valles Marineris was at one point squeezed in an east-west direction, producing the ridges, as well as stretched in a north-south direction, producing the cracks. Such pushing and pulling could have also tilted and twisted the rock strata in Martin Crater.

Though this is a wild guess, it appears based on this paper on the geology of this region to be reasonable, though there remain many uncertainties and questions about that conclusion.

All we really know is that some big geological event in the far past reshaped this terrain, massively. The strata inside Martin Crater gives us an impressive peak at that event.