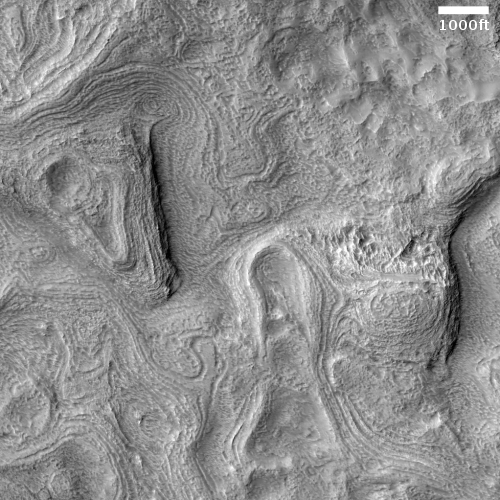 Cool image time! The photo to the right, taken on March 7, 2021 by the high resolution camera on Mars Reconnaissance Orbiter (MRO) and cropped and reduced to post here, shows us an example of one of Mars’ strangest and most puzzling geological features, dubbed banded or “taffy-pull” terrain by scientists.

Taffy-pull terrain has so far only been found within Hellas Basin, Mars’ deepest impact basin and what I like to call the basement of Mars. Because of the lower crater count in this terrain scientists consider it relatively young, no more than 3 billion years old, according to this 2014 paper, which also notes

The apparent sensitivity to local topography and preference for concentrating in localized depressions is compatible with deformation as a viscous fluid.

At the moment what that viscous fluid was remains a matter of debate. Many theories propose that ice and water acting in conjunction with salt caused their formation, similar to salt domes seen on Earth. Other propose that the terrain formed from some kind of volcanic or impact melt process.

Almost all of the taffy terrain on Mars has been found in the deepest parts of Hellas Basin in a curved trough along its western interior, as shown by the light blue areas in the overview map below. 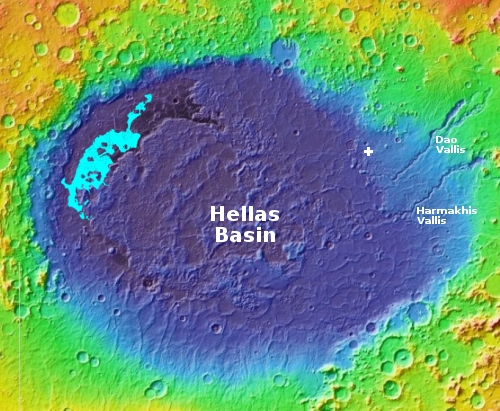 The white cross marks where this particular image is located, well to the east of the deepest parts of Hellas Basin where much of this taffy terrain is found.

This region however is also close to the glacial features found frequently in the canyons of Dao and Harmakhis, thus adding weight to the possibility that water was involved in forming this taffy.

Who knows? I can tell you that in reviewing several science papers devoted expressly to these features, the scientists don’t. For example, this 2016 paper (from which I obtained the light blue map of taffy terrain on my overview map) reviews all the hypotheses, and while it favors some, it shows no enthusiasm for any. None seem to answer all the questions.