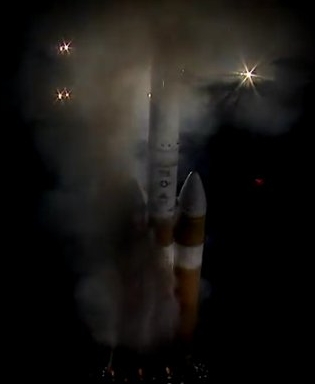 UPDATE: It appears ULA will need at least a week to analyze the situation before attempting another launch. It also appears that SpaceX is going forward with its two launches on August 30.

—————————
Tonight’s attempt by ULA to launch a National Reconnaissance Satellite on its Delta 4 Heavy rocket was aborted at T-3 seconds when the rocket’s main engines did an automatic abort. The image to the right shows the rocket immediately after the engines shut down, the smoke clearing and the rocket still sitting on the launch pad.

They are presently unfueling the rocket and will not launch tonight. They have not set a new launch date, and there is also no word on whether this launch delay will force delays in the two SpaceX launches set for August 30th. My guess is that the issue tonight will take time to assess, so they will give up their place in line and let SpaceX proceed as planned.

In watching ULA’s broadcast tonight, as well as reviewing the issues that prevented launch two days ago, I was struck by several things. First, ULA’s promo films to tout the wonders of the Delta family of rockets actually made them seem incredibly clunky and complex. There seemed to be too many pieces and complex operations to get the rocket ready for launch, which makes sense as Delta rockets are very costly and not competitive with today’s market. This is the exact reason ULA is in the process of retiring the entire Delta family. They will complete the already purchased and scheduled launches, but in the future will use their new Vulcan rocket for similar future bids.

Second, the number of minor and major technical issues during both countdowns reinforced my impressions above. This is a very complex rocket to launch, and that complexity apparently leads to many issues that make launch difficult.

For the scrub on August 26 they first had two blown fuses in a launchpad heater that had to be replaced, then a pneumatics system issue that was apparently not solved during the countdown. When they scrubbed, however, they said they did it because of “several problems,” not just this one.

On tonight’s launch they first had an issue with a fuel valve, then several fuel sensor alarms gave them problems, requiring them to disable them to proceed, then the temperatures in the payload electronics posed an issue that after some analysis was considered acceptable. These issues caused the launch to be delayed by about an hour and a half.

Finally, the rocket’s main engines shut down at the rescheduled lift-off time.

It might not be fair, but in comparing this ULA launch effort with the numerous countdowns by SpaceX the differences were stark. SpaceX has had comparable few issues during recent launches, with only one launch recently scrubbed due to a technical issue in July. Moreover, the company’s launch team has several times had similar launch aborts at T-0, and still were able to recycle everything and proceed to launch immediately.

All these impressions once again suggest that ULA is making the right decision to retire Delta. That it is going to take them several more years however to launch several more government surveillance satellites raises questions about the decisions of our government to pay for such a unwieldy and expensive rocket. There now are better and cheaper options available.