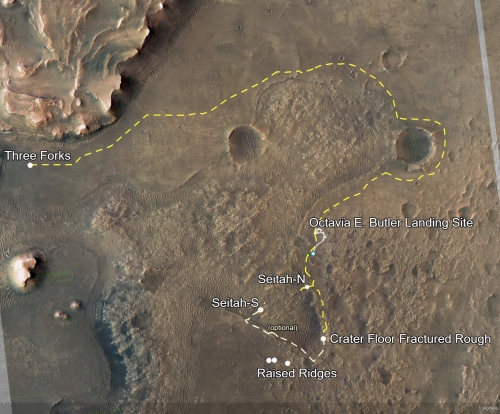 The science team for the rover Perseverance yesterday released a revised map of where they intend over the next few months to send the rover on the floor of Jezero Crater.

The map to the right, cropped and reduced to post here, shows that route.

The first science campaign (depicted with yellow hash marks) begins with the rover performing an arching drive southward from its landing site to Séítah-North (Séítah-N). At that point the rover will travel west a short distance to an overlook where it can view much of the Séítah unit. The “Séítah-N Overlook” could also become an area of scientific interest – with Perseverance performing a “toe dip” into the unit to collect remote-sensing measurements of geologic targets.

Once its time at the Séítah-N Overlook is complete, Perseverance will head east, then south toward a spot where the science team can study the Crater Floor Fractured Rough in greater detail. The first core sample collected by the mission will also take place at this location. After Cratered Floor Fractured Rough, the Perseverance rover team will evaluate whether additional exploration (depicted with light-yellow hash marks) farther south – and then west – is warranted.

At that point the rover will begin studying the base of the delta of material that in the far past poured through a gap in the western rim of Jezero Crater.