Vermont news outlet blacklists its own story to protect the queer agenda at a local school
November 2, 2022 12:58 pm Robert Zimmerman 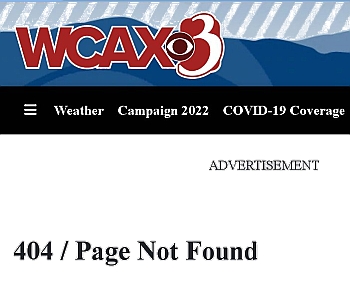 Today’s blacklist story is a follow-up on an earlier blacklist story. In September officials running Randolph High School in Vermont banned all the girls from the school’s volley ball team from the girls locker room, so that a cross-dressing boy would have that girls dressing room all to himself.

At the time I noted how this action by the school was “so absurd that at first glance it is hard to believe.”

Well, the story has become even more absurd. The news outlet that first reported the story, WCAX-TV, decided in mid-October to blacklist its own story in order to protect and promote the queer agenda in the local schools.

But [on October 11th], links to the controversial story and a recording of the newscast from that night went instead to a page that read “404/Not Found.” When … asked about the missing content, WCAX news director Roger Garrity said the station took it down last week “to prevent others from using our reporting to attack people in the transgender community.

“We didn’t announce it then for fear it might further inflame the situation,” Garrity wrote in an email. “We are now working with LGBTQ advocates on a message to the community acknowledging the harm that was caused.” In response to follow-up questions, Garrity said the station was working with Outright Vermont and GLAAD to craft its message and would put it on the 6 p.m. newscast “as soon as we have it ready to go.”

As noted, the link to the original WCAX story now results in a “404/Page not found” error. However, you can still watch it here on the Way Back machine internet archive.

The news station explained that after its video story broke and was picked up by many conservative outlets, the mother of the cross-dressing boy complained, claiming that the boy has done nothing wrong, and that the station’s coverage had caused her son pain. Her son noted how hurt he was.

“News is meant to inform but all you have done is enable lies that not only hurt me, but hurt the transgender youth [boys in girl’s clothing] that are within Randolph and Vermont,” the transgender student [more accurately a cross-dressing boy] wrote.

Neither he nor his mother, nor the WCAX reporter, addressed the allegation by the girls that he had made an “inappropriate comment while members of the volleyball team were getting changed.” I guess its okay for him to make normal girls uncomfortable, but god forbid anyone challenges him on his own abnormal behavior.

I must also add that for any news organization to use the term “transgender” illustrates its leftist agenda. The word does not inform, it specifically works instead to hide the fact that a boy has been granted the right to be in a girls locker room, so he can watch girls strip naked and he can also expose himself to them.

Note also that the boy is referred to as a “she” and as the mother’s “daughter” at the link. Both are outright lies, since this boy is still a boy, though dressed in girl’s clothing. News reporting should not cooperate with those who wish to push lies, and thus I refuse to play that game.

In fact, every news outlet which wants to be considered legitimate, as well as any blog or opinion site, should stop playing this game. Stop using the terms of the left. They are designed to obscure the truth while they force you into endorsing the left’s agenda.

Transgender equals cross-dresser. The transgender movement is simply the queer agenda, pushed in the schools. A boy cannot be called a “she” or a “daughter.” A man is not a woman. And “sexual transitioning” is nothing more than sexual mutilation and castration.

If you don’t call these things by what they really are, you are simply a quisling in left’s propaganda campaign to warp society and distort the truth.