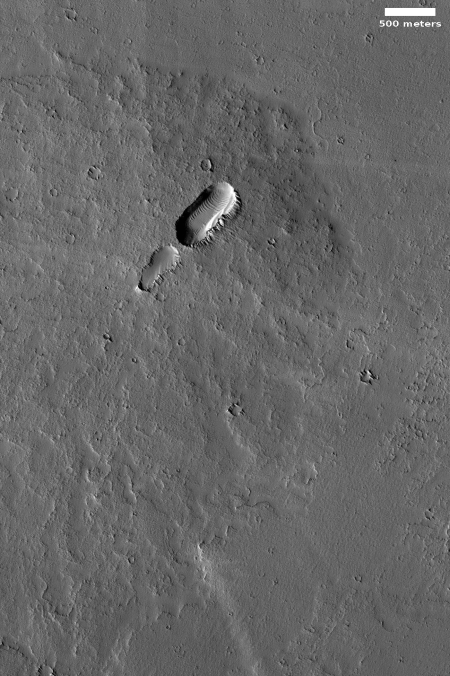 Cool image time. The photo on the right, rotated, cropped, and reduced to post here, was taken in September by the high resolution camera of Mars Reconnaissance Orbiter (MRO) and was part of the November image release. Click on the image to see the entire photograph at full resolution.

The uncaptioned release dubs this feature as “Small Eruptive Vents South of Pavonis Mons.” In truth, these vent pits are located almost exactly the same distance from both Pavonis Mons, the middle volcano in the line of three giant Martian volcanoes, and Arsia Mons, the southernmost of the three.

The image is interesting for several reasons. First, note the bulge surrounding the vent, making this look almost like a miniature volcano all its own. In fact, that is probably what it is. When it was active that bulge was likely caused by that activity, though it is hard to say whether the bulge was caused by flow coming from out of the vent, or by pressure from below pushing upward to cause the ground to rise. It could even have been a combination of both.

To my eye, most of the bulge was probably caused from pressure from below pushing upward. The edge of the bulge does not look like the leading edge of a lava flow. Still, this probably happened so long ago that Martian wind erosion and dust could have obscured that leading edge.

That this is old is indicated by the dunelike ripples inside the large pit, and the pond of trapped dust in the smaller pit. Because of the thinness of the Martian atmosphere it takes time to gather that much dust, during which time no eruptions have occurred.

One more interesting detail: If you look at the pits in full resolution, you will see that, based on the asymmetrical wind patterns between the west and east rims, the prevailing winds here are from the west. Located as it is just to the east of the gigantic saddle between Arsia and Pavonis Mons, this wind orientation makes sense, as a saddle between mountains tends to concentrate the wind, much like a narrowed section in a river produces faster water flow and rapids. As for why the wind blows mostly from the west, my guess (which should not be taken very seriously) is that it is probably caused by the same meteorological phenomenon that causes this generally on Earth, the planet’s rotation.