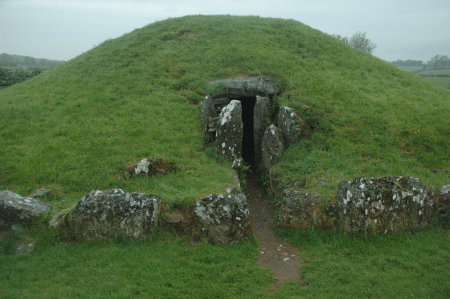 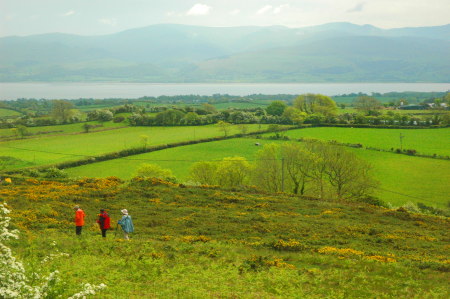 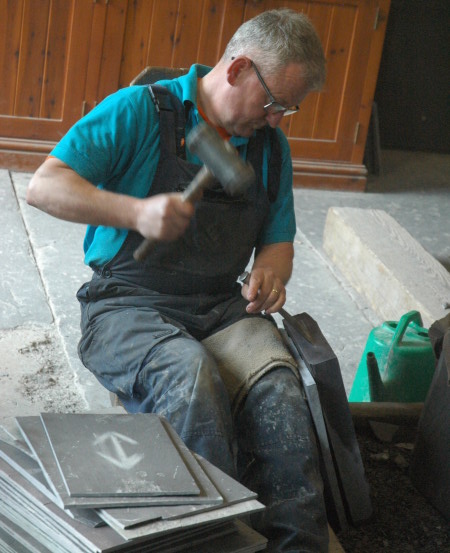 Our travels today in Wales took us to three sites, all completely different.

First we visited Bryn Celli Ddu, a neolithic burial chamber, built about 5,000 years ago and shown in the top right photo. After following a well-defined path along the edge of two fields, we all entered this mound and stood in the chamber inside. The entrance shown in the image was aligned with the summer solstice so that the sun at sunrise would beam directly into the inner chamber.

Next, we drove to the northeast corner of the island of Anglesey to climb a flat-topped hill called Arthur’s Table. Our guide, Gareth Roberts, has been doing extensive research on the place names in Wales that appear to link directly to the legend of King Arthur. It is his contention (supported by those place names as well as research by others) that Arthur was actually a Welsh military leader, born of Roman parents (who had integrated into Welsh society) and who united the tribes to fight the Saxon invaders in the sixth century, after the Romans had abandoned the British Isles. He has found more than a hundred place names in this part of Wales named in honor of Arthur. He has also found in the written record much evidence linking Arthur to Wales and the war to resist the Saxons.

This particular hilltop has been identified by archeology as the location of a significant Welsh village from the time the Romans were conquering Great Britain. The middle right photo, taken from the top, looks east across the Menai Strait that separates Anglesey from the mainland, with the mountains of Snowdonia beyond. This strait is where the Romans crossed in their first attempt to conquer Anglesey and Wales.

Roberts’ thinks that the Round Table from the King Arthur legends was a misinterpretation by later French and British storytellers of this important Welsh hilltop village. Instead of being a table where Arthur ruled with his knights, the table was this hilltop, where that Roman invasion was first spotted during their initial invasion. Five hundred years later, when the Saxons invaded and Arthur led the resistance to them, Roberts’ believes the name was given because in some way Arthur was connected to it.

The third image shows slate cutter John Jo as he demonstrates how to split slate into the thin slate tiles that are used to cover rooftops. We watched this demonstration as part of a full tour of the National Slate Museum, nestled within the mountains on the way to Snowdonia, where for more than hundred years one of the world’s biggest slate mines mined, processed, and sold slate. Closed since 1969, the mine facility now serves as a museum. The most spectacular feature of this mine facility was the still functioning giant water wheel, more than fifty feet in diameter, that was turned by a stream of gravity-fed water at its base and was used to run all the belts that powered all the belt-driven machinery in the facility. The video of the wheel, embedded below the fold, shows the wheel as we saw it today. Unfortunately it does not include any people in it for scale, though one of the last shots shows a ladder for accessing the wheel’s top. Trust me, a person seems dwarfed by this wheel.

We then drove up over the mountain pass in Snowdonia National Park to our hotel, nestled at the base of Mount Snowdon. We shall be spending the rest of our trip hiking these mountains. The hike tomorrow will once again be led by Gareth Roberts and will show us further links between Arthur and Wales. On Sunday we will attempt to hike to the top of Mount Snowdon.