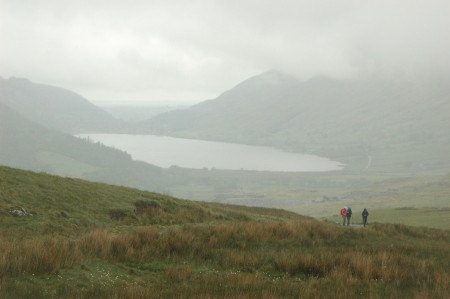 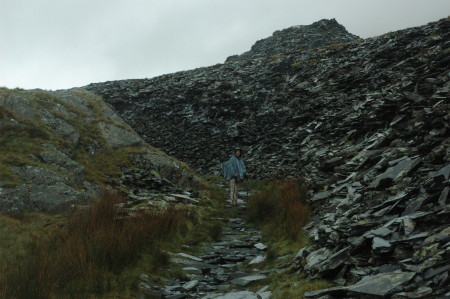 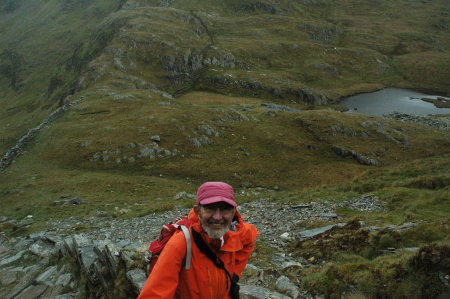 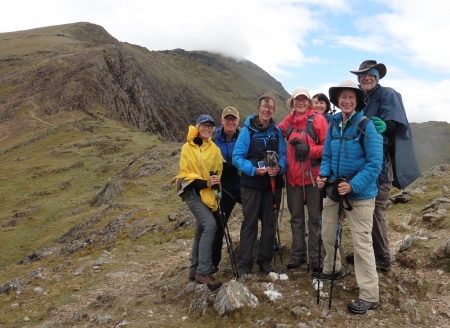 The goal today was to hike up to the top of Mount Snowdon, the highest point in Wales, as well as the island of England. Diane and I didn’t make it, but not for want of trying.

The route we took started at the trailhead of the Rhyd Ddu trail, one of the more popular routes up the mountain. The top photo to the right shows the view from the lower elevations of this trail, and gives a good sense of the beauty, barrenness, and dampness of the day. Though it never really rained on us, the sky was almost always overcast and the cloud cover sometimes came down to engulf us.

Rather than take Rhyd Ddu straight north to the top, however, our route has us head right (east) up the Clogwyn Du trail through the now inactive West Snowdon slate quarry, and then turn left (north) up the nose of a very steep ridgeline to meet up with Rhyd Ddu close to the summit. The second image on the left shows Diane standing on the trail surrounded by slate tailings from that quarry.

The next picture shows Hywel “Taff” Roberts, our leader and the owner of Wild Wales Tours, with the distant mountain floor below us. We have begun the climb up the nose of that ridgeline, with the initial section up a very steep stone staircase cut into the ground. I could not help but think of the stairs of Cirith Ungol from Tolkien’s Lord of the Rings.

The last photo was taken by Taff showing our entire crew, with the peak of Mount Snowdon hidden by clouds at the top center of the image. From left to right we have Pat, Dennis, the sisters Penny and Barbara, our second guide Haf, and then Diane and myself. The peak at the top-left is actually the start of the knife-edge ridgeline that leads to the peak. Where that ridgeline begins Clogwyn Du meets up again with Rhyd Ddu, which follows that very narrow knife-edge ridge to the summit, with 1000 foot drop-offs on either side.

When we got to Rhyd Ddu on that ridgeline Diane and I decided to head back down on Rhyd Ddu. We were now in the clouds, so going on to the peak seemed silly as we likely wouldn’t be able to see anything. Moreover, it was colder than either of us are used to or like. While Taff came down with us, everyone else continued to the peak. As I write this they have not yet returned, though I have no doubt they had a spectacular time crossing that ridge to the summit. UPDATE: The rest of the crew made the peak, but could see nothing for that entire section of hike, because of the clouds.

Not making the summit does not bother me much. I like to get to the top, but also know that we could it do another time should we decide to try. Diane and I have been doing this for a lot of years. We know our capabilities. We don’t need to prove them to others or ourselves.

Besides, the views up until then had been breath-taking, and they continued to be as good on the hike down. This was why we came, and it paid us amply in beauty every step of the way.