Was there a catastrophic flood in Kasei Valles on Mars?
October 22, 2020 1:45 pm Robert Zimmerman 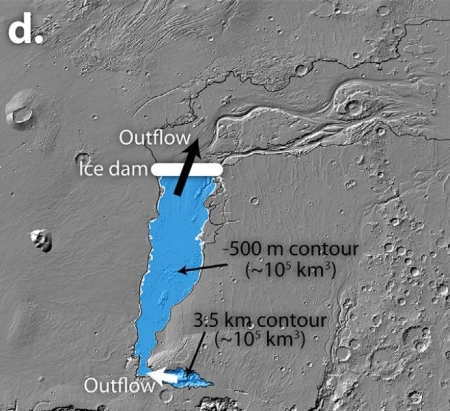 In our on-going exploration of Mars using the amazing high resolutions being taken by Mars Reconnaissance Orbiter (MRO), we return today to Kasei Valles, the drainage valley coming down from Mars’ giant volcanoes that I featured only a few days ago. And like that post, we must begin from afar and zoom in to understand what we are seeing in the final cool image.

Kasei Valles is a canyon system is about 1,900 miles long, and would cover two-thirds of the continental United States if placed on Earth. Its north-trending upstream section to the west and south of the area shown on the overview map to the right is thought to have been formed by some combination of glacial and volcanic processes. The downstream west-east section shown in the map instead appears to have been formed by a sudden catastrophic flood, which some scientists have theorized [pdf] occurred when a three hundred long ice dam broke suddenly, releasing the flood quickly across this terrain to create its features. The second map to the right, from their paper, illustrates this hypothesized event.

The white box in 60-mile wide Sharonov Crater near the center of the first map above indicates the location of today’s cool image below. The 1976 landing site of VIking 1 about 420 miles to the east is also indicated.

If you look closely at the first overview map above you can see that the rim of Sharonov Crater appears breached in its southwest quadrant, just to the west of the white box. This breach is less a break and more an area of increased erosion. Regardless, it sure appears that a massive flow pushed through the rim here. Our cool image to the right, taken on July 7, 2020, illustrates this. It shows what the MRO science team has labeled a “fan-shaped depost” descending from that eroded breached area of the crater’s rim. Like that eroded area, the terrain is knobby and uneven, as if the erosion that poured through here was unable to erode some hardened knobs as it pushed everything else away.

The whiteness of each knob’s peak is likely because wind has blown all dust away, revealing the bedrock below. In the color strip of this image the terrain is mostly dark blue, except for the peaks, which according to the science team [pdf] suggests “coarser-grained materials (sand and rocks).”

The direction of this fan, from the west to the east, matches all other flow features in this part of Kasei Valles, and reinforces the catastrophic flood theory.

The main scientific mystery of Mars however remains. While it appears these features must have been formed by a sudden burst of flood waters, all evidence we have of Mars’ long term climate precludes the possibility of liquid water on the planet’s surface. The atmosphere is too thin, and the temperatures are too cold, and no scientist has yet been able to put together a long time climate scenerio that would have permitted liquid water on the planet’s surface at any time in the past.

Thus, when that ice dam broke there shouldn’t have been a lake of water behind it, ready to flood the downstream portions of Kasei. Yet, the visual evidence strongly implies that such a flood happened. Moreover, there is amply evidence elsewhere, such as in Gale Crater, that there was once liquid water on Mars. These two facts are mutually exclusive, but based on what we know of Mars so far, both must be true, somehow.

This kind of mystery is what makes science, and the exploration of the universe, so fun. There is a truth here, but it is hidden, and requires us to look hard and deep to find it. No quick assumptions can be accepted quickly, and many theories must be first fashioned and then quickly discarded as more data arrives.