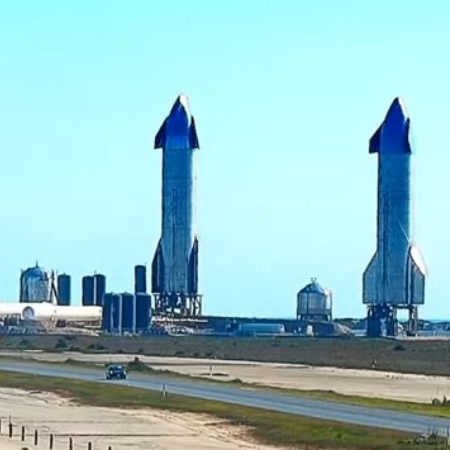 Capitalism in space: It appears that SpaceX has finally gotten approval from our benevolent government to attempt today a flight of the ninth prototype of its Starship. to a height of approximately 33,000 feet. The screen capture to the right from this morning shows Starship’s #9 and #10, both on their own launchpads. I think #9 is the one on the right.

Similar to the high-altitude flight test of Starship serial number 8 (SN8), SN9 will be powered through ascent by three Raptor engines, each shutting down in sequence prior to the vehicle reaching apogee – approximately 10 km in altitude. SN9 will perform a propellant transition to the internal header tanks, which hold landing propellant, before reorienting itself for reentry and a controlled aerodynamic descent.

The Starship prototype will descend under active aerodynamic control, accomplished by independent movement of two forward and two aft flaps on the vehicle. All four flaps are actuated by an onboard flight computer to control Starship’s attitude during flight and enable precise landing at the intended location. SN9’s Raptor engines will then reignite as the vehicle attempts a landing flip maneuver immediately before touching down on the landing pad adjacent to the launch mount.

SpaceX will be providing a live stream, which I shall embed here at Behind the Black once it becomes available about ten minutes before launch. In addition, there are these live streams available:

The SpaceX live feed will provide the best visuals, but that will not go live until just before launch. Right now I think the Labpadre live feed is my preferred choice because it provides a quick checklist on the screen telling you the countdown status, which in turn gives you an idea how soon the launch might be. For example, when the sirens sound, it means they are approximately 10 minutes to launch.

While this flight will likely be as epic as the flight of Starship #8, there is no guarantee it will occur today. Until they actually lights the candle, much of the action today will be like watching paint dry.