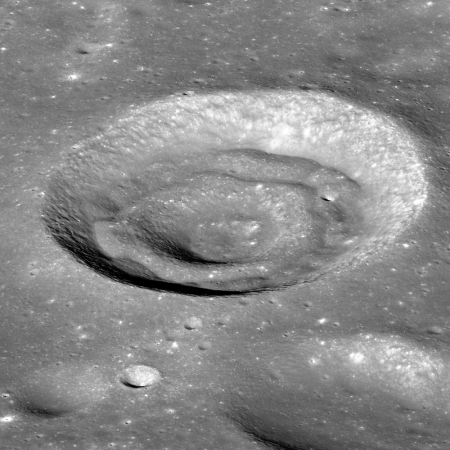 In celebration of the 50th anniversary of the Apollo 11 mission, it is time for another cool image from the Moon. The photograph on the right, reduced to post here, was taken by Lunar Reconnaissance Orbiter (LRO) in 2013. It shows a weird crater with concentric features that is found within Apollo Basin, a large 334-mile-wide double-ringed impact feature in the southern hemisphere of the Moon’s far side.

Concentric craters have an inner rim whose formation mechanism is not yet entirely understood, but the concentric mounds may indicate that there is a discontinuity, such as layers with different strengths, in the subsurface excavated by the impact.

Or to put it more bluntly, they really have no idea why this crater ended up looking as it does.