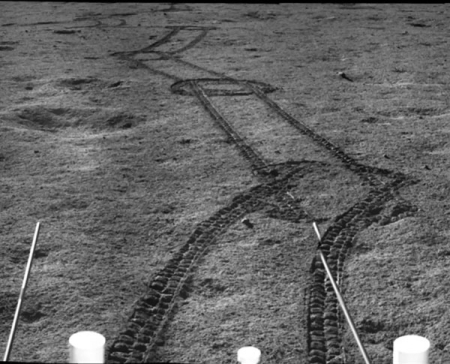 Both Yutu-2 and Chang’e-4 have been put in dormant mode after completing their eighth lunar day on the far side of the Moon.

The article at the link provides a lot of new details about what both spacecraft have learned and done since they landed, including a nice detailed map showing Yutu-2’s exact path during those eight lunar days. The image to the right, reduced to post here, was taken by Yutu-2, and shows the rover’s tracks during what appears to be its seventh lunar day. It appears that the rover periodically stopped and did a pirouette, probably to obtain a 360 degree mosaic of the surrounding terrain.

Yutu-2’s travels have tended west from Chang’e-4, and on its eighth lunar day it continues that route, traveling 271 meters. After a period of short traveling days, they have now upped the distance traversed by a considerable amount. Since the planned nominal mission for both spacecraft had been three lunar days, both are demonstrating that the Chinese have figured out how to do this, and are now pushing Yutu-2 hard as a result.

The article vaguely describes some of the science obtained so far, but in general the Chinese remain tight-lipped about most of their discoveries.