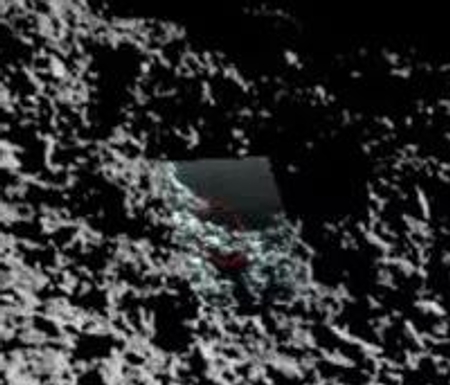 Chinese scientists have released images showing their approach and first look at the mysterious “gel-like material they spotted inside a small crater using their lunar rover Yutu-2, presently exploring an area on the far side of the Moon.

The image to the right, cropped and expanded to post here, focuses on that location. As much as we might wish it, the rectangle is not the monolith from 2001, a Space Odyssey. It is merely a section where it appears they increased the exposure to see more details in the shadows. Also, as noted at the webpage:

The compressed, black-and-white shot comes from an obstacle-avoidance camera on the rover. The green, rectangular area and red circle within are suspected to be related to the field of view of the Visible and Near-Infrared Spectrometer (VNIS) instrument, rather than the subject matter itself, according to some lunar scientists.

Apparently they were unsatisfied with the data from this viewpoint, and moved the rover to get a second better view. The results from that second location however have not been released.