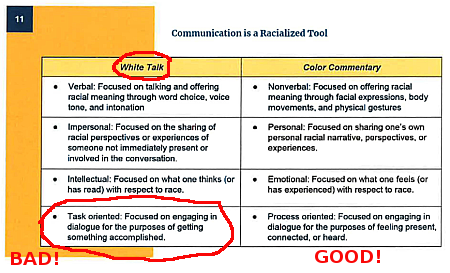 A view slide from the school’s bigoted training, annotated to
illustrate the program’s goals.

“Segregation today, segregation tomorrow, segregation forever!” When Emily Mais, assistant principal at Agnor-Hurt Elementary School in Virginia strongly objected to training materials being used by the Albemarle County school district that preached that only whites could be racists, and in fact all were, she found herself endlessly harassed, forced to make numerous public apologies, and eventually was forced to resign in the face of numerous insults and threats against her.

She has now enlisted the Alliance Defending Freedom to sue the Albemarle County School Board. From the first link above:

Mais’ problems with the district began in Feb. 2019 when the district adopted an “Anti-Racism Policy.” In Nov. 2020, the school held a “mandatory online orientation presentation for all [district] staff to introduce the Policy.” “During the orientation, the [district] suggested that anyone opposed to their Policy was a ‘racist’ and should consider finding a different job,” the lawsuit alleges.

In March 2021, Mais attended a district-wide professional development webinar entitled, “Becoming an Anti-Racist School System: A Courageous Conversation.” The curriculum taught educators that acts of racism can only be committed by members of the so-called “dominant race,” which is defined as white people.

The training curriculum was based on the book “Courageous Conversations About Race,” which the Virginia Office of Public Instruction dubbed as an “inherently divisive concept” that is “harmful to students and staff members alike.”

When Mais and other whites attempted to participate in these sessions, they were “…shut down or dismissed in front of other staff members and told they could not understand the topic because of the color of their skin.”

Mais subsequently found herself increasingly harassed and threatened by other teachers for her attempt to speak at this session, led apparently by the teacher who had run one session, Sheila Avery.

“Multiple employees” reportedly told Mais that Avery was “openly slandering” the administrator and “openly cursing about her and calling her vulgar names at work, telling other employees she was a racist and that she intentionally demeaned black people, and trying to turn other employees against her.”

Examples of slanderous phrases included, “That white racist b***h” and “That two-faced racist b***h,” according to the lawsuit. Mais allegedly reported this harassment to “numerous [district] officials, none of whom take any action to stop it.”

Faced with these constant displays of hate, Mais eventually was forced to resign. Her only crime? She rejected the district’s bigoted insistence that all whites are racists.

You can read the actual lawsuit complaint here [pdf]. As is usual for these cases, it reveals a level of viciousness and hate by these racist government goons that is appalling.

The lawsuit outlines how the school board’s treatment of Mais violated Virginia’s constitution by punishing her for her opinions and denying her guaranteed right of free speech. It also details how the school board also violated her rights in numerous ways under Virginia’s Human Rights Act, which outlaws discrimination and ill treatment against anyone based on their race.

As compensation for this illegal behavior, the lawsuit demands the school board provide back pay, front pay, compensatory and punitive damages, and “such other legal and/or equitable relief the court may deem just and proper.”

Whether Mais can win remains unclear. Her treatment by the school was patently evil. The racist training program it is imposing is equally evil and immoral, and illegal in so many ways they almost cannot be counted. Unfortunately, in modern America it is presently uncertain whether — on matters of race — morality and the law will be respected.