Don’t ask me to explain the geology on today’s cool image, rotated, cropped and reduced above. Taken by the high resolution camera on Mars Reconnaissance Orbiter (MRO) on August 16, 2019, the image’s uncaptioned website merely calls these “Convergent and Overlapping Narrow Curved Ridges.”

I am sure there are planetary scientists out there who have theories that might explain these features. I also know that they would forgive me if I remained skeptical of those theories. This geology is a puzzle. 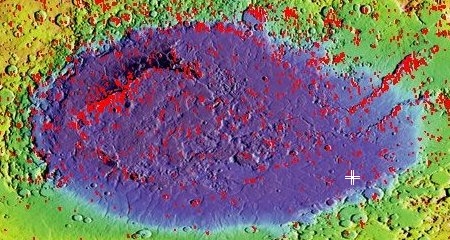 The location of these ridges is in the southeast corner of Hellas Basin, which I like to call the basement of Mars as it is the equivalent of the United States’ Death Valley, having the lowest relative elevation on the planet. As I have noted previously, the geology in this basin can be very strange. To my eye it often invokes a feeling that we are looking at Mars’s “uttermost foundation of stone” (to quote Tolkien), frozen lava that flowed in many ways and then froze in strange patterns.

Or not. Your guess is as good as mine.

The CERN physicist who plotted with Islamic terrorists has been sentenced to five years in prison.
May 4, 2012 9:21 am Robert Zimmerman

The CERN physicist who planned bombing attacks with Islamic terrorists has been sentenced to five years in prison.

The sentence includes one year “suspended”, and might end up being shortened further for time served and other sentence reductions. I wonder what he’ll do when he gets out.

Considering how easily this Muslim scientist apparently participated in conversations with terrorists where he casually discussed the idea of suicide bombings, his description of himself tells us quite a lot about Islam in general.

More details revealed describing the charges against the CERN scientist on trial in France for consorting with al-Qaeda.

Officials said they intercepted e-mails he exchanged with al-Qaeda’s North African branch, in which he plotted to blow up a Total oil refinery and a French military base. In one e-mail to suspected Islamic terror chief Mustapha Debchi, Hicheur said he would “propose possible objectives in Europe and particularly in France”. He wrote in March 2009: “Concerning the matter of objectives, they differ depending on the different results sought after the hits. For example: if it’s about punishing the state because of its military activities in Muslim countries – Afghanistan – then it should be a purely military objective. For example: the airbase at Karan Jefrier near Annecy in France. This base trains troops and sends them to Afghanistan.”

So, if these emails are accurate, this guy did far more than simply correspond with terrorists. He plotted to aid them in terrorists attacks.

The French trial of a CERN physicist for associating with terrorists began today.

As much as I fear and oppose the intolerant Islamic world, I worry when we in the West beginning putting people on trial merely for talking to the wrong people. I wish the accusations against this man weren’t so vague.