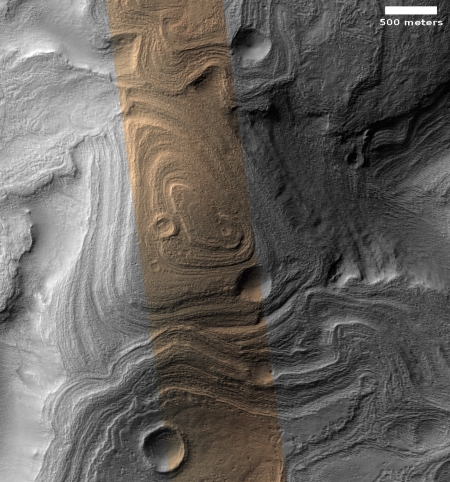 Cool image time! In my review of the most recent download of images from Mars Reconnaissance Orbiter’s (MRO) the high resolution camera, I found a very startling (and cool) image of some dramatic terraced Martian hills, taken on July 30, 2019. I wanted to post it here, but decided to first do some more digging, and found that an earlier image, taken in 2017, showed more of this particular hill. It is this earlier image posted to the right, cropped and reduced.

Don’t ask me to explain the geology that caused this hill to look as it does. I can provide some basic knowledge, but the details and better theories will have to come from the scientists who are studying this feature (who unfortunately did not respond to my request for further information).

What I can do is lay out what is known about this location, as indicated by the red box in the overview map below and to the right, and let my readers come up with their own theories. The odds of anyone being right might not be great, but it will be fun for everyone to speculate. 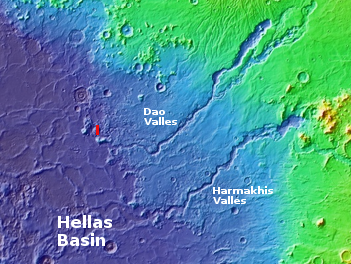 First, this location appears to be at the base of a large delta on the eastern end of Hellas Basin, into which several major valleys drain. As I wrote about this region in an earlier post, The river valleys of Hellas, these valleys “are all thought to have been formed from flowing water, all of which apparently drained from the east and to the west into Hellas Basin.”

Thus, it is thought that water might have once ponded in Hellas Basin, and could therefore contributed to the formation of these hills.

Note however that the elevations here do not have an obvious trend. In fact, the reason the new image was taken of this same location was to produce a stereo pair, in order to better constrain the topography of these features.

The make-up of the different layers also changes. Take a look at the full 2019 image. You can see distinct color changes as you scroll from north to south. These differences also probably contributed to the terraced look, as some layers were probably easier to erode than others. To my unprofessional eye, the impression is that the higher the layer, the more resistance it was, thus causing the terracing.

A review of all the other MRO images in this area (latitude 38.5 S, longitude 82.4) finds that all the closest images have similar terraces or bands.

There is also the possibility that some of what we are looking at here is buried glacial debris. Just to the north is a crater filled with what planetary geologists have dubbed concentric crater fill, a type of buried glacier that is routinely found within the north and south glacial bands from 30 to 60 degrees latitude.

The terracing is also old, as there are a number of impacts that occurred on top, after they formed. At the same time, the crater near the top of the hill appears to have a splattered and terraced look, which suggests it occurred when the geological processes forming the terraces were still on-going. I should also add that all the craters look like they went into relatively soft material, reinforcing the possibility that we are looking at buried ice.

At this point I’ve given you all I know. Speculate away!