Capitalism in space: Rather than replace the aging International Space Station (ISS) with an entirely government-designed-and-built new station, NASA is now reviewing about a dozen commercial proposals from private companies.

NASA earlier this year unveiled the Commercial LEO Destinations project, with plans to award up to $400 million in total contracts to as many as four companies to begin development of private space stations. In response to NASA’s request, its director of commercial spaceflight, Phil McAlister, told CNBC that the agency “received roughly about a dozen proposals” from a variety of companies for contracts under the project.

…The ISS is more than 20 years old and costs NASA about $4 billion a year to operate. The space station is approved to operate through the end of 2024, with a likely lifespan extension to the end of 2028. But, moving forward, McAlister says NASA wants “to be just one of many users instead of the primary sponsor and infrastructure supporter” for stations in low Earth orbit.

Based on these initial proposals, NASA officials estimate that the agency’s cost for running this future privately-built station will be about $1 billion per year less than the cost for operating ISS.

The agency will also only pay a part of the development cost for the new station, expecting that since the private company or companies will be making money from it also they should front a significant portion of that development cost.

Essentially NASA is following precisely the recommendations I put forth in my 2017 policy paper, Capitalism in space. And as I also predicted, the result is more achievement faster for far less cost. 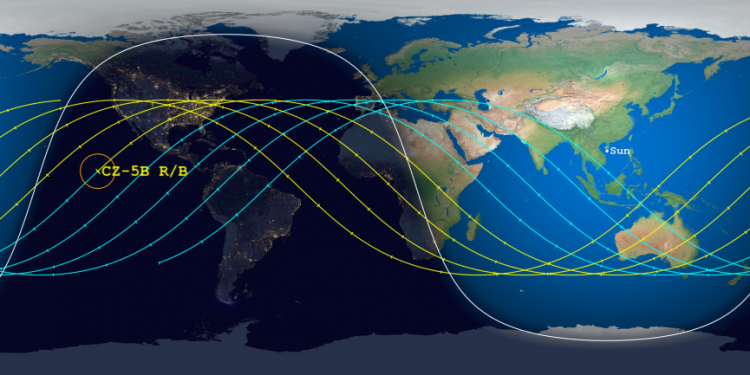 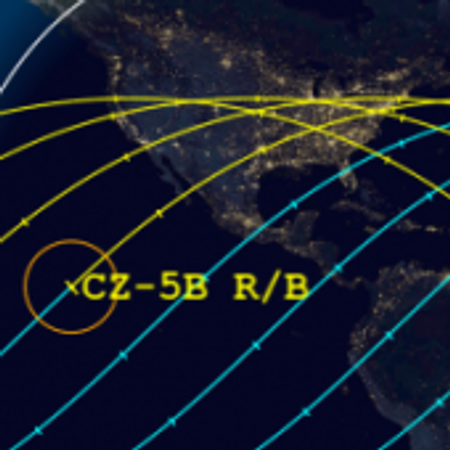 The reentry window of the 21-ton core stage for China’s Long March 5B rocket, launched on April 29th, has now narrowed to only 28 hours, with the centerpoint of that window on May 9th over the Pacific, only about 20 minutes before reaching Mexico and the continental U.S.

The update by the Aerospace Corporation is shown in the maps above and to the right. With the right map I have zoomed into the section over the U.S. to show the potential path of this core stage should it come down a bit later than presently predicted.

The circled point is centerpoint of the reentry window. The yellow orbital tracks are after that point, with the blue tracks previous. The tick marks indicate 15-minute intervals.

As you can see, the centerpoint is only about 20 minutes before the stage crosses Mexico and begins a half hour traverse above the continental United States from Texas to Maryland. If the stage should manage to stay up for another full orbit it will once again traverse the continental U.S., this crossing from San Diego to Cape Cod.

If the stage comes down early instead it could land anywhere from southern Europe to Australia, with the Middle East and India in between.

As I have noted already, China designed and launched this rocket knowing it was creating a giant piece of space junk that was going to fall on someone’s head. Just as that communist government has not cared that it has been dumping first stages on its own people for decades, it apparently does not care that it is dumping even bigger first stages on everyone else. The Long March 5B is the rocket they are using to launch the modules to their space station, as well as many of the future planetary missions to the Moon and Mars. And every time they launch it they will be dumping a core stage on someone, a direct violation of the Outer Space Treaty that China has signed.

The world’s governments should be outraged, and teaming up to demand that either China change this situation or delay future Long March 5B launches, or face serious financial consequences. Sadly, I do not expect this, as our present political class is either incompetent or corrupt and in the deep financial pockets of the Chinese.

The defense industry has found that the cuts from sequestration have been far less painful than their lobbying had claimed.
July 24, 2013 12:06 am Robert Zimmerman

Surprise, surprise! The defense industry has found that the cuts from sequestration have been far less painful than their lobbying had claimed.

Contractors seem pleasantly surprised that the automatic spending cuts are not hurting nearly as much as the industry’s lobbying arm warned they would in the months leading up to the sequester that took effect in March. [For example,] Lockheed Martin had predicted that sequestration would wipe out $825 million in revenue this year, but it no longer expects such a big hit. In fact, the company said, profit will be higher than initially projected. [emphasis mine]

The article specifically mentions the doomsday lobbying effort of the Aerospace Industries Association, As I noted back in December 2012, that lobbying was a lie. There is so much fat in the government that sequestration could have been three times bigger and it wouldn’t have done these contractors any serious harm. The inconsequential nature of those cuts now is illustrating the reality of this truth.