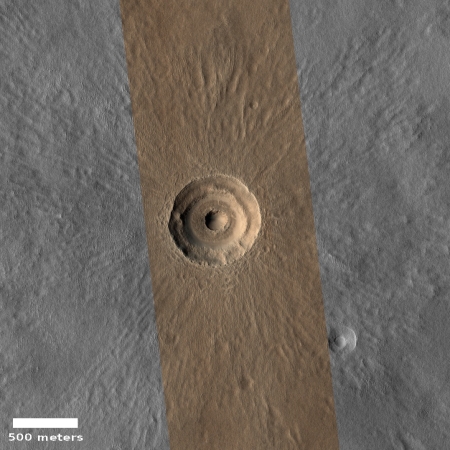 Cool image time! The photo on the right, cropped and reduced to post here, was taken by the high resolution camera of Mars Reconnaissance Orbiter (MRO) on November 30, 2019. It shows a lone crater on the flat northern lowlands of Mars in a region dubbed Arcadia Planitia.

The crater is intriguing because of its concentric ridges and central pit. As this region is known to have a great deal of subsurface water ice, close to the surface, these features were probably caused at impact. My guess is that the ice quickly melted, formed the kind circular ripples you see when you toss a pebble in a pond, but then quickly refroze again, in place.

This location is also of interest in that is it just north of the region that SpaceX considers the prime candidate landing site for its Starship manned spaceship.