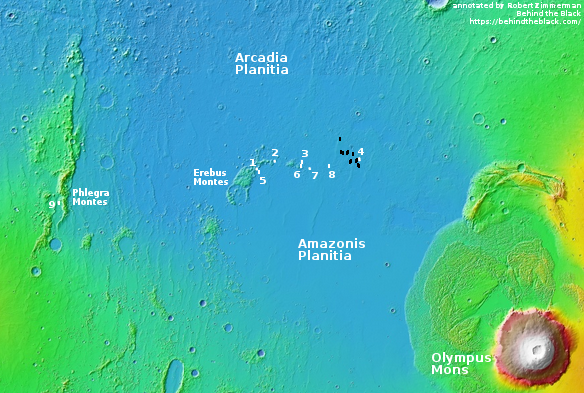 It now appears that SpaceX has completed its first round of Starship requests from MRO. In the image releases from Mars Reconnaissance Orbiter (MRO) since September, only three new Starship locations were taken, and all three were the unreleased candidate sites I noted in my September 16, 2019 update.

Below is the full list of all of the Starship images, their locations indicated on the map above by the numbered white boxes:

With the release of these last photographs, the initial list of proposed images of candidate Starship landing sites on Mars has apparently been completed. No additional images at any other locations appear to have been suggested. The MRO science team has taken stereo images of each one of the nine locations, eight of which were in Amazonis Planitia, and one in Phlegra Montes.

This however is not the first round of pictures requested by SpaceX of the Arcadia Planitia region in connection with the company’s desire to land spacecraft on Mars.

In 2017 SpaceX also requested about a dozen images for its then proposed Red Dragon mission, where they would use the Falcon Heavy to send a Dragon capsule to Mars. They abandoned this effort, partly because NASA did not want them to spend time and money on a test program to develop vertical landing for its Dragon capsule, and partly because they decided to shift gears toward their giant reusable Starship/Super Heavy rocket.

These Red Dragon images are indicated by the cluster of black boxes near Starship image #4. Based on their clustering, it appears that this location was the site that SpaceX had decided to send Red Dragon. The larger scatter of Starship images suggests the company is still not sure where it wishes to land that more advanced spaceship, and is reviewing other nearby locations for options.

The scattering of images and the lack of full coverage, however means that this first round is entirely insufficient to plan an actual landing. This is not a surprise, nor is it a mistake. This round is clearly a first look, to obtain a preliminary idea of what is there to help narrow their choices. Once they have reviewed these images I expect SpaceX to pick one to three locations and then focus its image targeting around these in order to determine their prime landing site.

Though most of these talks focused on the scientific value of each candidate site, the presentations about Arcadia Planitia all noted its abundant ice. One talk noted how this region had craters with ice within them, as well as lots of circumstantial evidence that ground ice was only a little bit below the ground. The craters were what scientists have dubbed “expanded craters,” whereby the sublimation of the ground ice caused the development of an outer depression surrounding the crater itself.

Another presentation pointed out that the mounds near Erebus Montes all have ice rich aprons, making access to water once again relatively easy. As Donna Viola of the University of Arizona noted, “I think you could dig anywhere to get your water ice.”

A third presentation, for an area west of Erebus Montes dubbed Phlegra Dorsa, was different in that it focused not on the scientific value that the site offered but the resources it made available to settlers. For example, the presentation noted the advantageous conditions at the site for working there. The region not only had significant ground ice, an essential resource for future settlers, it also had few rocks and low dust, making it a good place to land and work.

The lead author, Don Barker, was at the time a human spaceflight engineer who had spent twenty years working on the International Space Station. Though he was then also a PhD candidate in planetary geology, his interests leaned toward the engineering. “Most people at the conference focused on the science, which isn’t surprising when you have room full of scientists,” he explained. “I went for resource first, science second.” His thinking was that “if you can build it, they will come.”

It appears that SpaceX is following Barker’s approach as well, and in doing its own research have come to similar conclusions about the region near Erebus Montes. This location has all the right ingredients for a first human settlement: flat terrain for landing, accessible water ice for resources, low dust to ease the working conditions, and a low elevation and relatively low latitude (40 degrees) for a more benign climate. 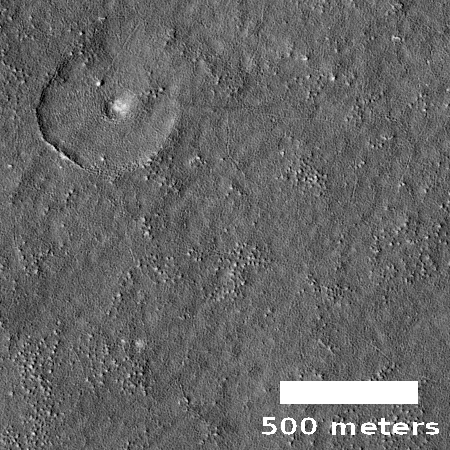 The image to the right provides us a typical example of what SpaceX is finding here. It is a cropped section of photo #8 in the Starship list above, and was the last one obtained for SpaceX by MRO. Colin Dundas of the U.S. Geological Survey’s Astrogeology Science Center in Arizona and a co-author for the second paper above, explained that the crater shown is an expanded crater, suggesting the presence of ice at shallow depth. He also noted to me that “it’s possible that other features in the image, such as pits and scarps, are produced by similar degradation processes.”

Based on all this research and the image locations being chosen by SpaceX, we therefore might someday hear a pilot of Starship take a breath and then announce to the world, “Arcadia Base here, the Starship has landed.”