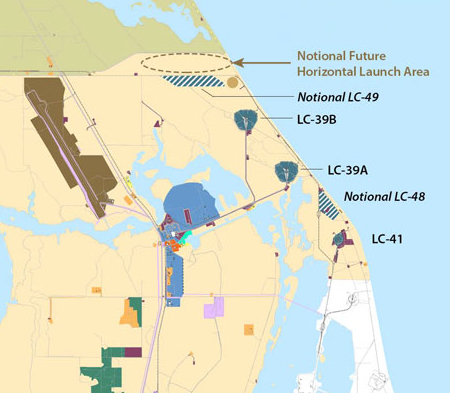 Capitalism in space: SpaceX has submitted a new proposal for building several launchpads at the Kennedy Space Center for its Starship heavy lift rocket, including rebuilding one old pad (LC-39A) and building another at a new site (the never used LC-49).

The project for LC-49 comes in addition to the previously announced work that SpaceX began within the perimeter of Launch Complex 39A, the K Environmental Program Office said. In September 2019, an environmental assessment was completed and a finding of “no significant impact” was issued.

The KEP [Kennedy Environmental Program] office noted that this new proposed expansion would allow for not only redundancy with launches of Starship, but also “allow SpaceX to increase the flight rate of Starship and minimize potential disruptions to Falcon, Falcon Heavy and Dragon missions at LC-39A.”

It also appears that SpaceX plans on creating a new Starship orbital launchpad at LC-39A that will not impact the use of that site by Falcon 9 and Falcon Heavy, though in the long run launches of those latter rockets will decrease as Starship becomes operational.

All these plans will need a full environmental assessment, but according to the article at the link, the process will be different than at Boca Chica in Texas.

The [environmental assessment]process likely won’t involve live discussions with the public, according to [Don Dankert, the technical lead for the Kennedy Environmental Planning Office], but the public will get comparable information, like with an EIS [Environmental Impact Statement]. “We will put out the same information,” Dankert said. “We’ll put out an informational packet with a .PDF chart, a description of the project and instructions on how to provide comments back to us and SpaceX.”

Engler said there may also be some lessons learned from the process of getting the launch facilities at Starbase approved for an orbital launch, but how that crossover would work has yet to be determined.

Sounds to me that this is all a pointless paperwork dance. The construction will be approved, no matter what, because Florida and Cape Canaveral desperately wants this new business and the jobs and tax dollars it will bring to the state.

The competition heats up: A new auto-destruct system operating by computer, using GPS, and installed on each rocket should allow the launch rate in Florida to ramp up significantly.

Up until now it took several days to reconfigure the ground-based radar facilities. This system, first used on the most recent Falcon 9 launch, does not require this. It also involves fewer people to operate it. They expect that they will soon be able to launch up to 48 missions per year, some on the same day.

Because of sudden Air Force preparations of the old space shuttle runway at Cape Canaveral it is now believed that the X-37B spacecraft presently in orbit for the past 21 months is about to come home.

The spacecraft has not yet landed, but recent orbital changes spotted by amateurs as well as runway preparations at the Cape all point to an end to the mission.

The X-37B landing also helps explain the until now curious delay to SpaceX’s launch of the SpX-10 resupply mission for the International Space Station which had originally been scheduled for the 14th as well – the opening day of the X-37B’s landing attempts at Kennedy. When the SpaceX mission was delayed, it was stated that range assets necessary for the return to launch site landing of the Falcon 9 core stage were not available from 14-17 February, while all other range assets necessary for launch were available during that window.

While the secretive nature of the mission precludes any exact knowledge of the ground track the X-37B will take, a descending node reentry over large portions of the United States is the likely option given the landing window for the restricted air space in and around the Kennedy Space Center.

If the X-37B lands this week, it will have completed the fourth such mission from the Air Force’s known fleet of two spacecraft. One did flights 1 and 3, while the other did flights 2 and 4.

An environmental report, prepared by SpaceX, describes in detail their plans to build landing facilities for their Dragon capsule as well as two more landing pads to facilitate the vertical landing of all three Falcon Heavy first stages at Launch Complex 13 at Cape Canaveral Air Force Station.

It is not clear when this work will go forward, though I suspect it will not be too far in the future.

The competition heats up: With 17, Florida had more rocket launches in 2015 than it has had in more than a dozen years.

Russia once again had the most launches in the year, with 29 (including 3 failures). Overall, launches worldwide were down, from 92 in 2014 to 87 in 2015. However, the uptick in the U.S., spurred I think by SpaceX, suggests that the U.S. numbers will continue to rise, and in in a few years the U.S.will take the lead.

Note also that when the shuttle was retired many thought that — with the loss of that government operation — it would be the end of the Florida launch business. Competition and private enterprise have instead shown that a dependence on government is not the only way to do things, and is in fact not the best way to do things.

More commercial space news; SpaceX is expanding its Florida operations in anticipation of a increased launch rate of Falcon 9 and Dragon capsules in the coming years.

VAB to be opened to tourists for the first time in years
October 24, 2011 6:56 pm Robert Zimmerman

The Vehicle Assembly Building at Cape Canaveral is going to be opened to tourists for the first time in years.

Back in around 1977 I was down in Florida for that year’s science fiction Worldcon convention. At one point we went out to the space center to take the tour. Since this was after Apollo but before the shuttle, the VAB was then part of the tour, and they took us inside at the ground level so we could look up into its vast height. Hopefully, the new tours will let the tourists see more.

Some advice on how to watch the last shuttle launch.

It’s worth it, believe me.

Better buy that ticket now if you want to see the last shuttle launch from the best spot: Online prices have soared for space shuttle Atlantis launch tickets.