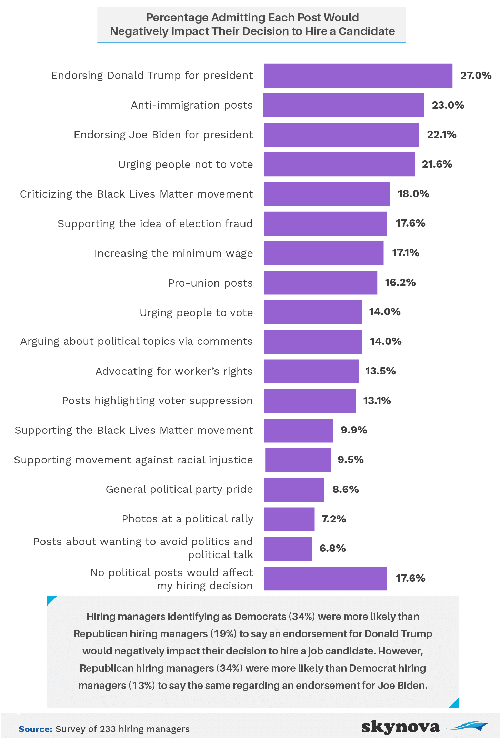 Blacklists are back and the Democrats got ’em: According to a new survey, those who publicly supported Trump or expressed conservative opinions on social media are being willingly blackballed by the hiring managers in corporate America.

A new survey of hiring managers provided to Secrets found that backing Trump on social media is the top reason to reject a job applicant.

The apparent reason: Human resources departments want to avoid “tiffs” between employees. “Likely to avoid future office tiffs, a significant portion of hiring managers admitted to negatively judging candidates based on the political content posted. For 27% of hiring managers, social media posts endorsing Donald Trump for president would negatively impact their decision to hire a candidate,” read the analysis of the poll done for Skynova, an online business software company.

While the list of political positions that causes employees heartburn in the graph above also includes some pro-Democratic Party positions — such as endorsing Joe Biden, supporting unions and a minimum wage — the majority are pro-Trump or conservative positions. Though there is a small chance you might be denied a job if you publicly stated your leftist beliefs, you almost certainly will be blackballed if you dared speak out against such beliefs.

Moreover, leftist workers are now eagerly looking for ways to blacklist conservative companies as well. From the survey:
END_OF_DOCUMENT_TOKEN_TO_BE_REPLACED