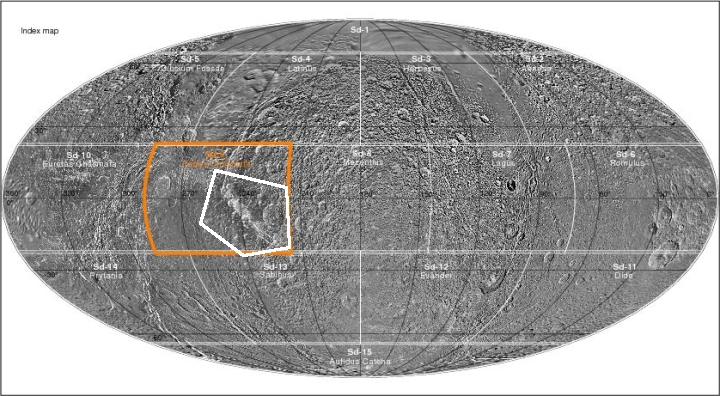 Cool image time! Today, for a change, I decided to spend some time rummaging through the Cassini raw image archive, mainly because I wanted to see some variety. At this time sadly almost all the good images coming from space are limited to Mars images, and I wished to post a cool image from somewhere else in the solar system.

The global map above was compiled from photographs of the Saturn moon Dione taken by Cassini during its thirteen years in orbit around the ringed giant.

The orange box indicates the sector of interest. The white outline indicates the location of the next photograph below and to the right, taken by Cassini during its first close fly-by of the moon on October 11, 2005, when the spacecraft was approaching the moon.
END_OF_DOCUMENT_TOKEN_TO_BE_REPLACED

Dione’s linear virgae are generally long (10 to 100s of kilometers), narrow (less than 5 kilometers) and brighter than the surrounding terrains. The stripes are parallel, appear to overlie other features and are unaffected by topography, suggesting they are among the youngest surfaces on Dione.

“Their orientation, parallel to the equator, and linearity are unlike anything else we’ve seen in the Solar System,” Patthoff said. “If they are caused by an exogenic source, that could be another means to bring new material to Dione. That material could have implications for the biological potential of Dione’s subsurface ocean.”

That they cut across the topography implies strongly that they were laid down from above, after the surface irregularities were created. Cool image time! The picture of Saturn’s moon Dione, taken by Cassini in April 2015 and reduced in size to show here, shows a range of global tectonic geological features. The impact craters we of course understand, but the white linear features are more puzzling. They are probably related to a heating and cooling process, but the full nature of that process is at present not fully understood. Tidal effects and the planet’s cooling over time both contributed, but to what extent is not yet known. Add on top of that the violent effect of impact and the process gets even more complicated. Moreover, do the linear features suggest present geological activity, or are they evidence of past events? Your guess is as good as mine. Cool image time! The image on the right was taken by Cassini in September 2015, and shows two Saturn moons, bright Enceladus partly blocked by darker and nearer Dione.

Although Dione (near) and Enceladus (far) are composed of nearly the same materials, Enceladus has a considerably higher reflectivity than Dione. As a result, it appears brighter against the dark night sky.

The surface of Enceladus (313 miles or 504 kilometers across) endures a constant rain of ice grains from its south polar jets. As a result, its surface is more like fresh, bright, snow than Dione’s (698 miles or 1123 kilometers across) older, weathered surface. As clean, fresh surfaces are left exposed in space, they slowly gather dust and radiation damage and darken in a process known as “space weathering.”

The image doesn’t contain any earth-shattering discoveries. It is simply beautiful. And in these dark times, seeing beauty is sometimes the most important thing one can do.

Cassini has found hints of activity coming from the Saturn moon Dione.
May 29, 2013 4:26 pm Robert Zimmerman

Cassini has found hints of activity coming from the Saturn moon Dione.

The spacecraft’s magnetometer has detected a faint particle stream coming from the moon, and images showed evidence for a possible liquid or slushy layer under its rock-hard ice crust. Other Cassini images have also revealed ancient, inactive fractures at Dione similar to those seen at Enceladus that currently spray water ice and organic particles.