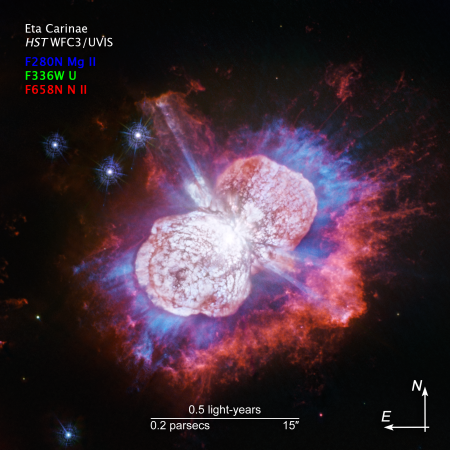 Using the Hubble Space Telescope, astronomers have taken a new spectacular image of the Luminous Blue Giant star Eta Carina. The image on the right is that photograph, reduced to post here.

Using Hubble’s Wide Field Camera 3 to map the ultraviolet-light glow of magnesium embedded in warm gas (shown in blue), astronomers were surprised to discover the gas in places they had not seen it before.

Scientists have long known that the outer material thrown off in the 1840s eruption has been heated by shock waves after crashing into the doomed star’s previously ejected material. In the new images, the team had expected to find light from magnesium coming from the same complicated array of filaments as seen in the glowing nitrogen (shown in red). Instead, a completely new luminous magnesium structure was found in the space between the dusty bipolar bubbles and the outer shock-heated nitrogen-rich filaments.

Eta Carina had a major eruption in the 1840s, followed by other lesser outbursts, the evidence of which is obvious in this and other earlier Hubble images. In fact, over the past twenty-five years Hubble has actually tracked the expansion of those two lobes of material being flung from the star hidden deep in the material.

Someday in the far future astronomers believe it will die as a supernova, though that is only a hypothesis at this point, based on our presently limited understanding of stellar evolution.

New data from the space telescope NuSTAR suggests that the giant star Eta Carina, expected to be a supernova sometime in the future, emits cosmic rays, some of which reach the Earth.

The cosmic rays are produced by shock waves resulting from the clash between the intense solar winds of the system’s two stars.

Go to the link to see a truly beautiful image of this star system. You will immediately see that it is a system exploding.