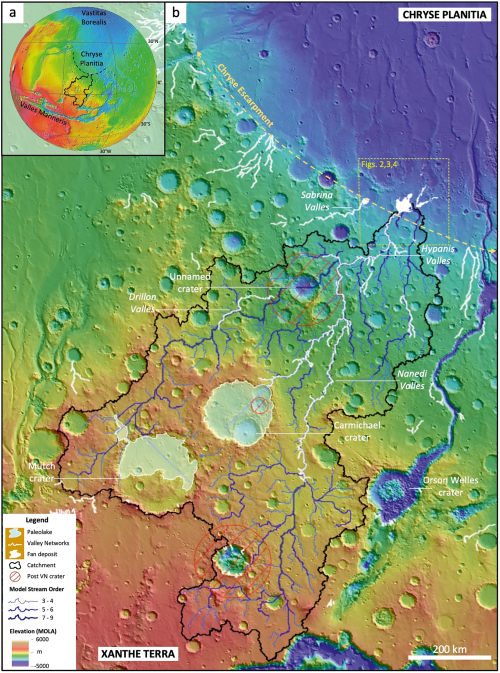 Cool map time! The map to the right, reduced to post here, is figure 1 in a new paper outlining the known geology of what appears to be a large ancient and now dry river basin with delta on Mars, found north of Valles Marineris and draining into the northern lowland plain dubbed Chryse Planitia where both Viking-1 and Mars Pathfinder landed, in 1976 and 1997 respectively.

The river basin itself is called Hypanis Valles. The white splotch at the river basin’s outlet is dubbed the Hypanis Deposit, and is thought by some scientists to be a delta of material that was placed there when the river was active 3.6 billion years ago and poured into what some scientists believe was an intermittent ocean in Chryse Planitia. From the paper’s conclusion:

As proposed in prior works, Hypanis may have formed subaqueously as a delta, and may record a water level drop of about 500 m[eters, or about 1,600 feet] as a shoreline retreated to the northeast. We identified kilometer-sized cones and mounds which appear to have erupted onto the surface. Characteristics of these features more closely resemble those of outgassing, sedimentary diapirism, and mud volcanism rather than of igneous volcanism.

The intermittent ocean theory has problems however. For this delta to have formed underwater that ocean would have to have been much much larger than estimated based on the present known data, extending out to cover almost all of Chryse Planitia, in some places to a very great depth.

Some scientists have hypothesized that the ocean need not have been that large because a land dam would have confined it to a smaller region at the river’s outlet. This research however found no evidence of such a dam. However, the paper also noted that “Further work could examine the role of ice or glaciers in the formation of Hypanis and determine if an ice dam would be plausible.”

And of course there remains the more fundamental mystery of liquid water on the Martian surface, which makes the river basin itself a puzzle. No generally accepted model allowing for surface liquid water on Mars presently exists. The possibility that ice and glaciers could have done the job comes to mind again. Though the geology in this region reveals what looks like to our Earth eyes to be a very large river system, now dry, this is not Earth but an alien planet. Tributary systems like this might form from different and as yet not understood processes on Mars, some of which might involve glaciers.