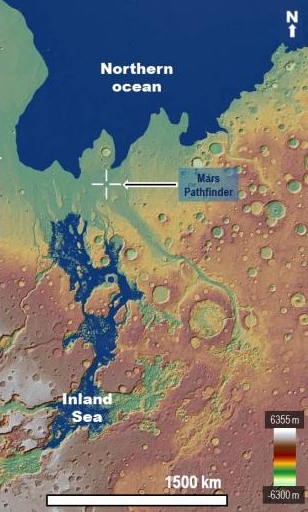 A new analysis of Martian data once again suggests that an intermittent ocean once existed in the planet’s northern hemisphere, and that it was fed by catastrophic floods coming down from the volcanoes through Marineris Valles.

“Our simulation shows that the presence of the sea would have attenuated cataclysmic floods, leading to shallow spillovers that reached the Pathfinder landing site and produced the bedforms detected by the spacecraft,” said [lead scientist Alexis Rodriguez].

The team’s results indicate that marine spillover deposits contributed to the landscape that the spacecraft detected nearly 22 years ago, and reconcile the mission’s in situ geologic observations and decades of remote-sensing outflow channel investigations.

The sea bears an uncanny resemblance to the Aral Sea on Earth in that in both instances they lack distinct shoreline terraces. Its rapid regression over shallow submerged slopes resulted in rates of shoreline front retreat too fast for the terraces to form. The same process could partly account for the long-recognized lack of northern plains shorelines.

“Our numerical simulations indicate that the sea rapidly became ice-covered and disappeared within a few thousand years due to its rapid evaporation and sublimation. During this time, however, it remained liquid below its ice cover,” said PSI Senior Scientist Bryan Travis, a co-author in the paper.

The map above shows the outlet region to the west and north of Marineris Valles. (The paper from which it is adapted is available on line here.) It shows that inland sea, created by the catastrophic floods. Because it sits at a lower elevation than the plains to the north, the floods that entered it ponded there, where they dried up. Only when the floods were at their highest did the water spill out into the northern plains.

In reading the paper, it confirms many of the suppositions I myself have made in my frequent posts analyzing numerous Mars Reconnaissance Orbiter (MRO) images, such as the lack of a clear shoreline because the ocean was short-lived. As it dried up its edge left patches of shoreline, at different elevations and in pondlike patterns, almost like the beach debris left behind by the tide.

The paper also shows that some of my guesses were not quite correct. For example, this new analysis says that the catastrophic floods only partly carved out the chaos terrain of Hydraotes Chaos, rather than do it all as I supposed here. Instead, the floods contributed, but much of the erosion occurred when the short-lived inland sea existed here, eroding away at the mesas from all sides.

Read it all. Though this remains a simulation based on what is presently very incomplete data and thus has many uncertainties, it will give you a much deeper understanding of what we presently theorize about the past geological history of Mars.