Agents of both ICE and the FBI took bribes to provide protection as well as cook the records for an indicted Los Angeles lawyer.

We only know this because conviction of the lawyer says so. The FBI agent is named and has been charged. The ICE agent however remains a mystery, for unknown reasons.

But don’t worry. The government is wise and all-knowing. The best thing we can do during this Wuhan panic is give them a lot of power!

How a private effort run by space geeks hopes to bring ISEE-3 back to life.
May 25, 2014 at 8:57 am Robert Zimmerman Points of Information

How a private effort run by space geeks hopes to bring ISEE-3 back to life.

Crowd-funding the engineering and money to bring a 1970s NASA space probe back to life.
April 16, 2014 at 8:50 am Robert Zimmerman Points of Information

Crowd-funding the engineering and money to bring a 1970s NASA space probe back to life.

The idea is brilliant. The probe, ISEE-3, has functioning instruments. It just hasn’t been operated since the 1980s. If they can get the funds to pay for the effort, they will provide scientists a space probe for pennies.

Scientists now think it is possible for there to be floating methane ice on the lakes of Titan.
January 8, 2013 at 11:56 am Robert Zimmerman Points of Information

Scientists now think it is possible for there to be floating methane ice on the lakes of Titan.

Up to this point, Cassini scientists assumed that Titan lakes would not have floating ice, because solid methane is denser than liquid methane and would sink. But the new model considers the interaction between the lakes and the atmosphere, resulting in different mixtures of compositions, pockets of nitrogen gas, and changes in temperature. The result, scientists found, is that winter ice will float in Titan’s methane-and-ethane-rich lakes and seas if the temperature is below the freezing point of methane — minus 297 degrees Fahrenheit (90.4 kelvins). The scientists realized all the varieties of ice they considered would float if they were composed of at least 5 percent “air,” which is an average composition for young sea ice on Earth. (“Air” on Titan has significantly more nitrogen than Earth air and almost no oxygen.)

According to this article, the water-ice discovered at Shackleton Crater is insufficient for human settlement.
June 21, 2012 at 8:44 am Robert Zimmerman Points of Information

The uncertainty of science: According to this article, the water-ice discovery announced yesterday at Shackleton Crater is insufficient for human settlement.

The latest LRO data indicate “that water is not there … in a way that would facilitate human exploration,” says planetary scientist Maria Zuber, who led the team analyzing the data.

If the signatures the team saw in the soils on the crater floor do indicate water, how much water might there be? Roughly 100 gallons – enough to fill two or three residential rain barrels – spread over a surface of about 133 square miles. Leave the swim-suit at home. “This is not like Mars,” says Dr. Zuber, a professor at the Massachusetts Institute of Technology in Cambridge, in an interview. On the red planet, explorers would find thick layers of icy soil in many locations just by turning over a shovelful or two of topsoil. [emphasis mine]

This story seems to answer my question about Zuber’s participation in the water in Shackleton paper as well as the previous paper saying there is much less water on the Moon than previously believed. It also raises questions about the journalism work of many of the other stories published in the past few days, which heavily touted the possibility of water in Shackleton.

I intend to dig into this story a bit more. Stay tuned.

The Moon: a desert after all? 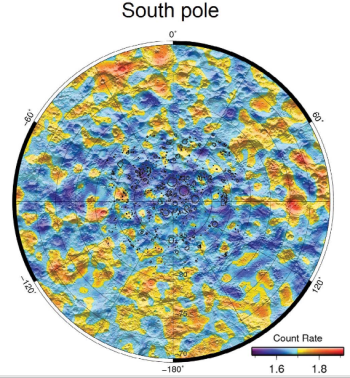 The uncertainty of science: A new science paper, published Saturday in the Journal of Geophysical Research – Planets,, has found that there is much less water ice trapped in the permanently shadowed craters of the lunar poles than previously thought. From the abstract:

END_OF_DOCUMENT_TOKEN_TO_BE_REPLACED

Images from Messenger now appear to support past radio telescope observations that suggested there was water-ice in the permanently shadowed craters of Mercury.
May 31, 2012 at 8:56 pm Robert Zimmerman Points of Information

Images from Messenger now appear to support past radio telescope observations that suggested there was water-ice in the permanently shadowed craters of Mercury.

Roughly half of Vesta is cold enough for water ice to survive below the surface
January 25, 2012 at 2:40 pm Robert Zimmerman Points of Information

New computer models suggest that roughly half of the asteroid Vesta is cold enough for ice to survive below the surface.

“Unable to pass its immigration agenda through legislation, the Administration is now implementing it through agency policy.”
June 24, 2011 at 7:11 pm Robert Zimmerman Points of Information

From the head of union representing agents of Immigration and Customs Enforcement (ICE): “Unable to pass its immigration agenda through legislation, the Administration is now implementing it through agency policy.” And if you still have doubts about the unwillingness of the Obama administration to enforce the law, there’s also this quote:

Our officers are already under orders not to make arrests or even talk to foreign nationals in most cases unless another agency has already arrested them; you won’t find that written in any public ICE policy.

Antarctic increase in sea ice since 1970 cannot be explained by ozone hole
October 2, 2010 at 5:37 pm Robert Zimmerman Points of Information

In another paper published today in the Geophysical Research Letters of the American Geophysical Union, researchers have found, according to their computer model, that the increase in sea ice since 1970 in Antarctica cannot be explained by the ozone hole. (Note that the sea ice has been shrinking in the northern hemisphere while it has been growing in the south.) Key quote from paper:

It is presently unclear why the observed Southern Hemisphere sea ice extent trends are so different from those in the Northern Hemisphere. Previous studies have suggested that the cause might be related to atmospheric circulation changes induced by the stratospheric ozone hole. The results in this study are not consistent with this view and highlight the need for continued investigations of Antarctic sea ice extent trends.

Avalanches on Mars
July 5, 2010 at 10:28 am Robert Zimmerman Behind The Black, Essays And Commentaries

Saturday’s weekly dump of publications from the American Geophysical Union also included a paper that showed visual proof of avalanches on Mars! In this case, the location is Russell Crater, “a large crater in the southern hemisphere that exposes a large dune field in its center.” The avalanches occur because a frost layer made up of dry ice and a little bit of frozen water builds up on the crest of the dunes. When that frost melts, dark streaks about three to six feet wide and about 150 feet long appear, flowing downhill. The scientists believe these are avalanches made up of “a mixing of sand, dust, and unstable CO2 gas.”

Before and after shots of the dark streaks flowing down the dune.

Close-ups of the streaks, before and after.