First look at the new Starliner flight suit being made by Dover
June 16, 2022 10:08 am Robert Zimmerman

It appears that the flight suit that the company ILC Dover is making for Boeing’s Starliner manned capsule has been unveiled not by the company but as part of an exhibit at the Kennedy Space Centers’ visitor complex.

Announced late last month, Boeing’s choice of ILC Dover’s AES came somewhat out of the blue. The aerospace company had previously selected another spacesuit manufacturer, the David Clark Company, to provide pressure garments for astronauts launching and landing on its CST-100 Starliner capsules.

An example of the David Clark suit, which was first revealed in 2017, has already flown twice to space on Boeing’s two orbital flight tests. Although astronauts have yet to fly on the Starliner, an anthropometric test device (instrumented mannequin) named “Rosie the Rocketeer” was dressed in the suit for the trial missions.

Boeing’s next and, as currently planned, final Starliner test flight will carry a crew, who will also wear the David Clark suit, according to a statement released by the company. The ILC AES will be introduced once Boeing begins flying astronauts on NASA-contracted missions to and from the International Space Station in 2023.

“In the spirit of commercial human spaceflight, we made the decision to bring an additional Starliner spacesuit supplier online to introduce additional redundancy, flexibility and competition for crew accommodations on future flights to low-Earth orbit destinations. We expect to introduce the new suits during operational missions, and are pleased to see the market opening up and allowing more options for Boeing as well as our government and commercial customers,” read the company’s statement.

In my opinion, the graphics at the link of both suits show them both to appear more comfortable and better looking than SpaceX’s Dragon flight suits. That opinion however is just a question of taste and style, and has nothing to do with the suits’ operation or use.

Boeing picks company to manufacture flight suits for passengers on Starliner
May 30, 2022 10:19 am Robert Zimmerman 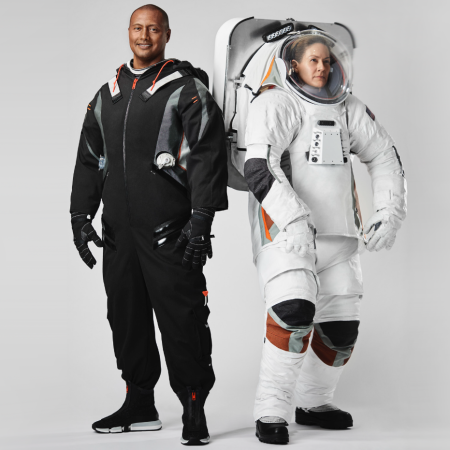 Capitalism in space: On May 26th ILC Dover announced it has been chosen by Boeing as one of two companies to manufacture flight suits for passengers on Starliner.

The Boeing AES [Ascent/Entry Suit] is based off ILC Dover’s commercial Launch, Entry, and Abort suit, SOL™. ILC Dover worked with Boeing to tailor SOL for the Starliner spacecraft to provide protection for astronauts during the most critical phases of spaceflight, including launch, docking, re-entry and landing. With over 50 years of spacesuit experience, the AES suit was designed to provide maximum mobility to operate, enter and exit the spacecraft, as well as provide protection for astronauts in case of an emergency.

The black spacesuit on the left in the picture is Dover’s SOL suit, which it is adapting for Boeing. The white suit is the spacewalk suit it has made for NASA for use on ISS, which I also think is the same spacesuit that has for now almost a decade had repeated problems with water leaking into the helmet.

In other words, big space Boeing has hired another big space company to build its Starliner flight suits. I hope ILC Dover does a better job with the AES suit then it has with its EVA suit.