The National Science Foundation yesterday announced the inauguration of science operations of the Daniel K. Inouye Solar Telescope in Hawaii.

The sample first images provided at the link are excellent, but rather than show this telescope’s abilities, they instead illustrate the absurdity of spending millions to build a ground-based telescope. None compare with the spectacular high resolution solar images being produced today from the myriad of solar telescopes in space.

Moreover, the history of this telescope tells us much about the bankrupt nature of all modern government projects:

Over 25 years ago, the NSF invested in creating a world-leading, ground-based solar observatory to confront the most pressing questions in solar physics and space weather events that impact Earth. This vision, executed by the Association of Universities for Research in Astronomy (AURA) through the NSF’s National Solar Observatory (NSO), was realized during the formal inauguration of the Inouye Solar Telescope. [emphasis mine]

It took our modern incompetent federal government a quarter century to build this single telescope. Compare that with the construction of the solar telescopes it is replacing. They were conceived, designed, and built in much less than a decade back in the early 1960s. And cost less too.

The press release at the link also spends a lot of space touting “diversity” and “Native Hawaiian” cultural needs, which really have nothing to do with the study of the Sun. That focus tells us how misguided our government has become, and how it is using its coercive power to drag us all along down that foolish path towards hell. 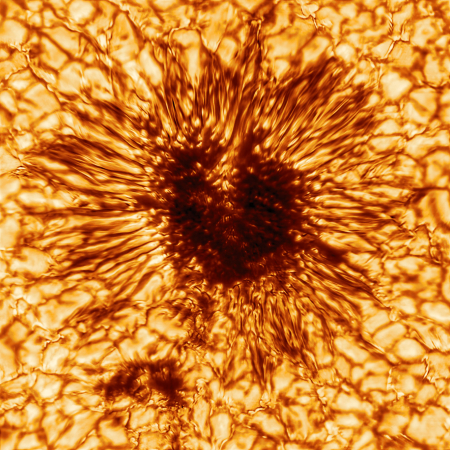 The science team for the new Inouye Solar Telescope, now in the final phase of construction, has released the telescope’s first high resolution sunspot image.

“The sunspot image achieves a spatial resolution about 2.5 times higher than ever previously achieved, showing magnetic structures as small as 20 kilometers on the surface of the sun,” said [Dr. Thomas Rimmele, the associate director at NSF’s National Solar Observatory (NSO)].

The image reveals striking details of the sunspot’s structure as seen at the Sun’s surface. The streaky appearance of hot and cool gas spidering out from the darker center is the result of sculpting by a convergence of intense magnetic fields and hot gasses boiling up from below.

…This sunspot image, measuring about 10,000 miles across, is just a tiny part of the Sun. However, the sunspot is large enough that Earth could comfortably fit inside.

The start of official telescope operations is set to begin in ’21, and had been delayed because of the Wuhan flu panic. Construction had begun in ’13.