Citizen scientists Kevin Gill and Tanya Oleksuik have used raw images from Juno to create several really cool images of the eclipse shadow of Io moving across the face of Jupiter. The image above, by Gill, is what I think is the most dramatic. The other images are here, here, here, here, and here.

Oleksuik notes that the colors are not true, and are enhanced for drama. Also, the shadow in many of the images are much too large relative to the globe of Jupiter. The last link above gives a better sense of the true size of that shadow against Jupiter’s giant sphere. Io’s shadow only covers a tiny part of the surface. The reason it appears larger is that the whole image does not see the entire hemisphere.

Having determined that Io’s largest volcano appears to erupt on a regularly schedule, scientists have predicted that a new eruption should occur sometime in the next week or so.

The volcano Loki is expected to erupt in mid-September, 2019, according to a poster by Planetary Science Institute Senior Scientist Julie Rathbun presented today.

“Loki is the largest and most powerful volcano on Io, so bright in the infrared that we can detect it using telescopes on the Earth,” Rathbun said. Based on more than 20 years of observations, Loki undergoes periodic brightenings when it erupts on a relatively regular schedule. In the 1990s, that schedule was approximately every 540 days. It currently appears to be approximately every 475 days. Rathbun discovered the 540-day periodicity, described in her 2002 paper “L. Loki, Io: A periodic volcano” that appeared in Geophysical Research Letters.

These same scientists successfully predicted Loki’s last eruption based on this data, but also warn that there is no guarantee the volcano will do what they say. As stock brokers are required to say, past performance is no guarantee of future results.

Scientists catch a big volcano eruption on Io
December 28, 2017 at 9:12 am Robert Zimmerman Points of Information

Scientists reviewing twenty year old data from the Galileo orbiter that studied Jupiter and its moons in the 1990s have identified the most intense volcanic eruption yet found on Io.

While looking through the NIMS temperature data, Davies and his colleagues spotted a brief but intense moment of high temperatures that cooled oddly quickly. This signal showed up as a spike in heat from a region in the southern hemisphere called Marduk Fluctus. First, the researchers saw a heat signal jump to 4–10 times higher than background, or relatively normal, levels. Then just a minute later, the signal dropped about 20%. Another minute later, the signal dropped another 75%. Twenty-three minutes later, the signal had plummeted to the equivalent of the background levels.

This signature resembled nothing Davies had seen before from Io. The lava flows and lava lakes are familiar: Their heat signals peter out slowly because as the surface of a lava flow cools, it creates a protective barrier of solid rock over a mushy, molten inside. Heat from magma underneath conducts through this newly formed crust and radiates from Io’s surface as it cools, which can take quite a long time.

This new heat signature, on the other hand, represents a process never before seen on Io, Davies said: something intense, powerful, and—most important—fast.

There’s only one likely explanation for what the instruments saw, explained Davies, whose volcanic expertise starts here on Earth. Large, violent eruptions like those seen at Stromboli are capable of spewing huge masses of tiny particles into the air, which cool quickly.

The article makes it sound like we’ve never seen this kind of eruption on Io before, which isn’t really true. Such eruptions have been imaged, but this is the first time that infrared data of their temperature spike was captured, thus confirming its nature.

Using ground-based telescopes from 2013 to 2015 astronomers have been able to track the volcanic eruptions occurring on Jupiter’s moon Io.

The resolution isn’t great, but they can definitely detect changes on the surface that even indicate that some eruptions actually appear to trigger other eruptions.

New data from the ground-based Gemini telescope suggests that Io’s sulfur dioxide atmosphere freezes and then reinflates each time the moon flies through Jupiter’s shadow.

A study led by SwRI’s Constantine Tsang concluded that Io’s thin atmosphere, which consists primarily of sulfur dioxide (SO2) gas emitted from volcanoes, collapses as the SO2 freezes onto the surface as ice when Io is shaded by Jupiter. When the moon moves out of eclipse and ice warms, the atmosphere reforms through sublimation, where ice converts directly to gas.

The data is somewhat uncertain, however, as it based on only two observations.

A volcano eruption on Io
August 4, 2014 at 1:17 pm Robert Zimmerman Points of Information

More here, including information on two other eruptions that occurred about the same time.

The location of the volcanoes on Titan are not where scientists had expected them to be.
April 5, 2013 at 9:30 am Robert Zimmerman Points of Information

The uncertainty of science: The location of the volcanoes on Titan are not where scientists had expected them to be.

As Io moves closer to Jupiter, the planet’s powerful gravity pulls hard on the moon, deforming it. This force decreases as Io retreats, and the moon bounces back. This cycle of flexing creates friction in Io’s interior, which in turn generates enormous amounts of volcano-driving tidal heat. Common sense suggests that Io’s volcanoes would be located above the spots with the most dramatic internal heating. But Hamilton and his colleagues found that the volcanoes are significantly farther to the east than expected.

Many of the news headlines, including the article above, have trumpeted how the volcanoes on Io are in the wrong place. (See also this article.) Not. The theories were wrong, not the volcanoes. Nature does what it wants to do. It is our job to figure out why. 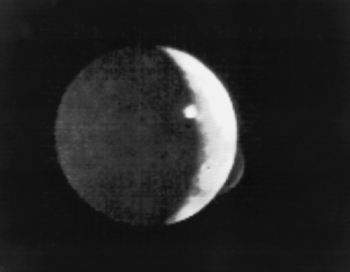 Today, on the astro-ph preprint website, Morabito has published a minute-by-minute account of that discovery. It makes for fascinating reading, partly because the discovery was so exciting and unique, partly because it illustrated starkly the human nature of science research, and partly because of the amazing circumstances of that discovery. Only one week before, scientists has predicted active volcanism on Io in a paper published in the journal Science. To quote her abstract:
END_OF_DOCUMENT_TOKEN_TO_BE_REPLACED

Astronomers now have the technology to observe Io’s volcanoes erupt, from Earth.
October 17, 2012 at 8:49 am Robert Zimmerman Points of Information

Astronomers now have the technology to observe Io’s volcanoes erupt, from Earth.

Scientists have published the first complete global geological map of the Jupiter moon Io.
March 19, 2012 at 11:22 am Robert Zimmerman Points of Information

The highly detailed, colorful map reveals a number of volcanic features, including: paterae (caldera-like depressions), lava flow fields, tholi (volcanic domes), and plume deposits, in various shapes, sizes and colors, as well as high mountains and large expanses of sulfur- and sulfur dioxide-rich plains. The mapping identified 425 paterae, or individual volcanic centers. One feature you will not see on the geologic map is impact craters. “Io has no impact craters; it is the only object in the Solar System where we have not seen any impact craters, testifying to Io’s very active volcanic resurfacing,” says Williams.