They’re coming for you next: The new California ethnic studies program that is expected to be imposed on all the state’s classrooms is in fact based entirely on critical race theory (CRT) that makes whites the devil and all other minorities its victims, except Jews, who are targeted for special condemnation using language reminiscent of Nazi Germany.

Because of outrage over the bigoted nature of the earlier versions, two revisions have been offered, both of which really changed nothing of substance. The last version however added the following:

Two lessons have been offered about Jews. One, following crude CRT dogma, teaches that Mizrahi Jews coming to the United States from Arab lands were mistreated by “white” Ashkenazim. The other suggests that Jews of European descent have white privilege.

The Jewish Journal points out that Jews are the only group in the curriculum for whom the term “privilege” is used. And this privilege is not earned by way of talent, or educational and professional attainment, but rather trickery. The ESMC, echoing Nazi propaganda about Jews as impostors and appropriators hiding in plain sight, points out that American Jews often change their names (“this practice of name-changing continues to the present day”) to change their rank in the social hierarchy.

The historical reality of repeated genocidal attacks on Jews because of their perceived or imagined privilege is not offered as counterpoint, because ethnic studies teachers assume the Holocaust is taught in world history class. But next year in San Mateo County, world history will be replaced by ethnic studies.[emphasis in original]

There is a lot more in the article at the link. Overall it outlines the racist, white- and Jew-hating nature of critical race theory, about to be imposed on all students in California’s public school system, even as that system removes any teaching about world history and the Nazi genocide of millions of Jews. 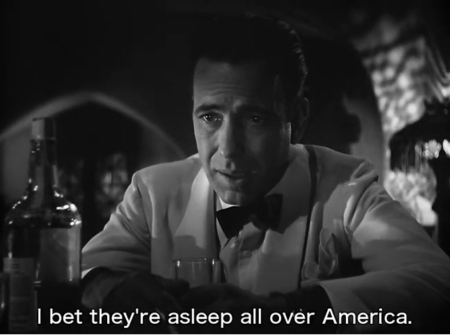 If you live in California, you voted for this, either from apathy, ignorance, or maybe even your own bigoted motives. And while one would expect Californians to be horrified and ashamed by this, I fully expect more apathy and ignorance, even as the bigots gain more power.

As I say, they’re coming for you next. And I fear that few decent people are doing anything to stop these thugs.

Guess who that “familiar villain” happens to be. It shouldn’t surprise you, though it horrifies me that this is happening again, in the west, in civilized society, and among the so-called intellectual elites of the U.S. and Europe.

If you are really serious about understanding what has been going on in the Middle East these past few months, make sure you read the entire article, carefully, and slowly. The conclusion will tell you a great deal about what is going to happen in the coming years. The fact that most intellectuals in the West will be caught with their pants down when it does happen can best be summed up by how that conclusion begins:

Because a gap has opened here between the way things are and the way they are described, opinions are wrong and policies are wrong, and observers are regularly blindsided by events. Such things have happened before. In the years leading to the breakdown of Soviet Communism in 1991, as the Russia expert Leon Aron wrote in a 2011 essay for Foreign Policy, “virtually no Western expert, scholar, official, or politician foresaw the impending collapse of the Soviet Union.” The empire had been rotting for years and the signs were there, but the people who were supposed to be seeing and reporting them failed and when the superpower imploded everyone was surprised.

Can You Judge A President by His Jew-Hating Friends?
March 8, 2012 2:22 pm Robert Zimmerman

Can you judge a President by his Jew-hating friends?

More than 40 non-Catholic religious organizations, including both Jews and Protestants, have declared their “solidarity” with the Catholics against the Obama administrations new health regulations.
February 3, 2012 9:58 am Robert Zimmerman

More than 40 non-Catholic religious organizations, including both Jews and Protestants, have declared their “solidarity” with the Catholics against the Obama administration’s new health regulations under Obamacare.

The tolerance of Islam: Jews banned at Jewish holy site in Egypt.

The alarming significance of culture.

During a recent conversation with a close Jewish friend I asked him what he thought separated Jews from most other ethnic groups. I was expecting him to talk about how a shared history of oppression had strengthened Jews and brought them closer together. But his answer was both surprising and controversial. “Unlike gentiles, especially Christians,” he said, “Jews do not believe in an after life as such. There is no God up there dictating your lot in life. We don’t believe the meek shall inherit the earth. We truly believe in the power of an individual’s free will, guided of course by right principles.” [emphasis mine]