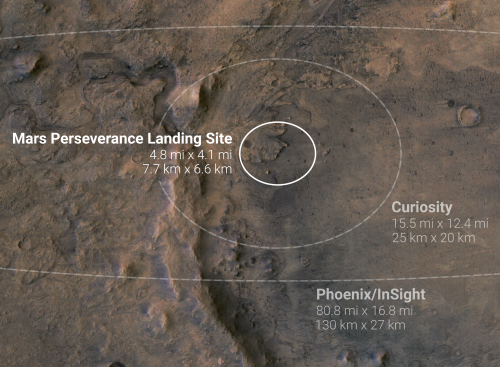 In just over a month, on February 18, 2021, the American rover Perseverance will come screaming through the thin atmosphere of Mars at a speed of over 12,000 miles per hour to hopefully land successfully in Jezero Crater.

The map to the right, cropped and reduced to post here, was released last week by the Perseverance science team and shows the landing ellipse in that crater. It also shows the much larger landing ellipses of previous landers/rovers. As they noted,
END_OF_DOCUMENT_TOKEN_TO_BE_REPLACED 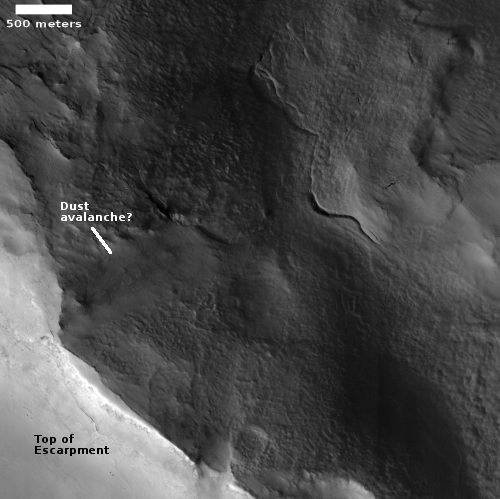 Cool image time! On Mars things change, but not like on Earth because the atmosphere is not as thick and there is no flowing water. The photo to the right, rotated, cropped, reduced, and annotated to post here, gives a good example of that slow change. The image was taken on August 29, 2020 by the high resolution camera on Mars Reconnaissance Orbiter (MRO), and shows the high escarpment that in this one place separates the planet’s southern cratered highlands from the transition zone down to northern lowland plains.

In this spot that escarpment, approximately 4,000 feet high, shows signs of avalanches and sagging. In the upper steep section, I point to what looks like a dust avalanche that wiped the slope clear of rough terrain as it rolled downhill. At the bottom of the cliff a large section has separated away. Since this cliff is located at 28 degrees north latitude and is in the midst of the chaos terrain regions I like to dub glacier country, it is very possible that this large section is actually buried glacial ice that in shifting down slope cracked, separating the lower section from the upper.

This particular location is east of an area dubbed Nilosyrtis Mensae (where there is a lot of evidence of glaciers and frozen ice), and about 650 miles north of Jezero Crater, where the rover Perseverance will land on February 18, 2021.

If all goes right, on February 18, 2021 the rover Perseverance will gently settle down onto the floor of Jezero Crater on Mars. The image to the right is probably the most reproduced of this site, as it shows the spectacular delta that some scientists believe might be hardened mud that had once flowed like liquid or lava from the break in the rim to the west.

They hope to put Perseverance down to the southeast of that delta, as shown in the overview map below.
END_OF_DOCUMENT_TOKEN_TO_BE_REPLACED

The Curiosity science team is asking the help of ordinary citizens in improving the software it uses to plan Curiosity’s future travels.

Using the online tool AI4Mars to label terrain features in pictures downloaded from the Red Planet, you can train an artificial intelligence algorithm to automatically read the landscape.

Is that a big rock to the left? Could it be sand? Or maybe it’s nice, flat bedrock. AI4Mars, which is hosted on the citizen science website Zooniverse, lets you draw boundaries around terrain and choose one of four labels. Those labels are key to sharpening the Martian terrain-classification algorithm called SPOC (Soil Property and Object Classification).

The goal is not to have citizens plan the rover’s route, but to use their judgments to refine the software that the scientists and engineers use to plan the route. This refinement will also be applicable to Perseverance when it gets to Jezero Crater in February 2021.

A JPL press release today outlines some of the main engineering differences between Curiosity, the rover that has been exploring Gale Crater for the past fifteen years, and Mars2020, the unnamed rover that will be launched in July 2020 to explore Jezero Crater

One of the major the engineering improvements, based on what was learned with Curiosity, are the Mars2020 wheels:

Curiosity has prepared Mars 2020’s team for “off-roading” on the Red Planet. When holes began appearing in the veteran rover’s aluminum wheels, engineers realized that sharp rocks cemented on the Martian surface exert more pressure on the wheels than expected. Careful drive planning, along with a software upgrade, will keep them in shape for the rest of Curiosity’s journey up Mount Sharp.

While Mars 2020’s wheels are made from the same materials, they’re slightly bigger and narrower, with skins that are almost a millimeter thicker. Instead of Curiosity’s chevron-pattern treads, or grousers, Mars 2020 has straighter ones and twice as many per wheel (48 versus 24). Extensive testing in JPL’s Mars Yard has shown these treads better withstand the pressure from sharp rocks but work just as well on sand.

The computer and software has also been upgraded to speed daily operations. In addition, the new rover will have 23 cameras, six more than Curiosity, all of which will be capable of producing color images. And most important, the drill will be larger and will drill cores for obtaining samples that will be stored for possible return by a later mission.

The landing is set for February 18, 2021. If all goes well this rover will be exploring the Martian surface well in to the 2030s.

Jezero Crater: The landing site for the Mars 2020 rover

At this week’s 50th Lunar and Planetary Science Conference in Texas, there were many papers detailing the geological, topographical, chemical, meteorology and biological circumstances at the landing sites for the 2020 Martian rovers, Jezero Crater for the U.S.’s Mars 2020 and Oxia Planum for Europe’s Rosalind Franklin.

Most of these papers are a bit too esoteric for the general public (though if you like to delve into this stuff like I do, go to the conference program and search for “Jezero” and “Oxia” and you can delve to your heart’s content). 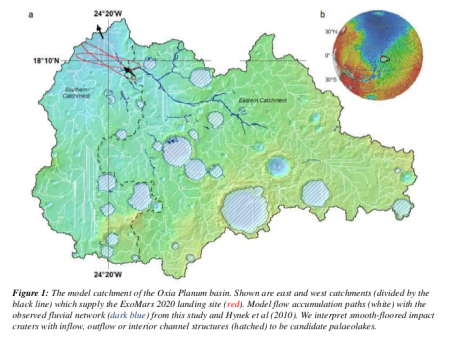 These papers do make it possible to understand why each site was chosen. I have already done this analysis for Rosalind Franklin, which you can read here and here. Oxia Planum is in the transition between the southern highlands and the northern lowlands (where an intermittent ocean might have once existed). Here can be found many shoreline features. In fact, one of the papers at this week’s conference mapped [pdf] the drainage patterns surrounding the landing ellipse, including the water catchment areas, as shown by the figure from that paper on the right.

With this post I want to focus on Jezero Crater, the Mars 2020 landing site. The image above shows the crater’s most interesting feature, an impressive delta of material that apparently flowed out of the break in the western wall of the crater.

This image however does not tell us much about where exactly the rover will land, or go. To do that, we must zoom out a bit.
END_OF_DOCUMENT_TOKEN_TO_BE_REPLACED For the next Mars rover, scheduled to launch in 2020, scientists have now narrowed their candidate landing sites to eight, with Jezero Crater (pictured on the right) the favorite choice.

The top vote getter was Jezero crater, which contains a relic river delta that could have concentrated and preserved organic molecules. “The appeal is twofold,” says Bethany Ehlmann, a planetary scientist at the California Institute of Technology (Caltech) in Pasadena. “Not only is there a delta, but the rocks upstream are varied and diverse.”

The image clearly shows the scientific attraction of Jezero Crater, with an obvious meandering river canyon opening out into an obvious river delta. The crater in the delta will also give them an opportunity to do some dating research, since that crater had to have been put there after the delta was formed.

The choice however illustrates the difference in goals between scientists and future colonists. Scientists are looking for the most interesting locations for understanding the geological history of Mars. Future colonists want to find the best places to establish a home. Jezero Crater, as well as the other eight candidate sites, do not necessarily fit that settlement need. For a colonist it might be better to put a rover down on the flanks of Arsia Mons, one of Mars’ giant craters where scientists have evidence of both water-ice and caves. None of the candidate sites, however, are aimed anywhere close to this volcanic region, because scientifically it is not as interesting.

This is not to say that the candidate sites might not be good settlement sites. It is only to note that the focus of these scientists is research only. Furthermore, it is probably premature anyway to look for settlement sites. We need to know more about Mars itself.