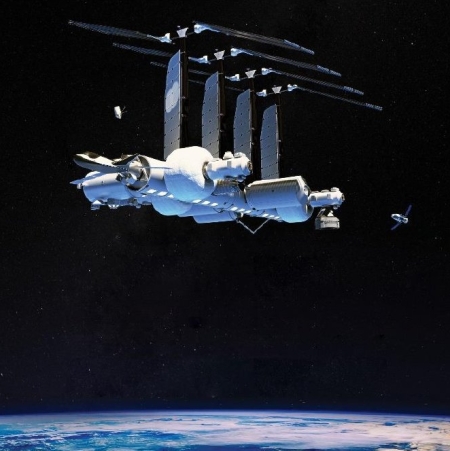 Capitalism in space: Sierra Space and Blue Origin today announced [pdf] that they are forming a consortium of space companies to build a space station they dub Orbital Reef. From the press release:

The Orbital Reef team of experts brings proven capabilities and new visions to provide key elements and services, including unique experience from building and operating the International Space Station:

I suspect that this deal is actually telling us that Jeff Bezos is spreading some of his Blue Origin money to help finance Sierra Space’s work. The deal also appears to be an effort to generate work for Blue Origin’s not-yet-launched New Glenn rocket and Boeing’s not-yet launched Starliner capsule.

The release says nothing about target dates, but the overview [pdf] on the Orbital Reef website says they are aiming for the second half of this decade.

While the success of such a project can only increase the competition and lower the cost to orbit, thus making the settlement of space more likely, this announcement reeks of the same kind of high-minded promises that came with Blue Origin’s Blue Moon lunar lander: Big plans by the best and most established space companies, with little firm commitment by these companies to actually build anything.

Compared to the Blue Moon lunar lander project, however, this project has one very significant difference that could make it real. Orbital Reef is not being touted in order to win a government contract. It is being touted as a commercial station for private customers. Such a project will require these companies to either invest their own money, or obtain outside investment capital, to build it. To make money they can’t sit and wait for their customers to pay for it, since customers never do that (except the government). They need to first build it.

Meanwhile, the BE-4 engine is not yet flight worthy, so that Blue Origin’s New Glenn rocket remains no closer to launch, even though it is now approaching two years behind schedule.