I have embedded the video below the fold. It shows the four grid fins unfolding, but not much else. It also reveals that the Chinese very clearly were inspired by SpaceX’s Falcon 9 grid fin design.

The video also gives me the impression that the Long March 2C first stage does not have any thrusters, which were SpaceX’s primary mode for controlling its first stages, the grid fins added later when they understood better the engineering required. Thus I suspect that the fins were not very successful in controlling that stage’s flight.

Nonetheless, the Chinese are doing these tests during operations, which means they are only a first step on a path to success.
END_OF_DOCUMENT_TOKEN_TO_BE_REPLACED

Chinese news sources today confirmed that during its last launch on July 26, they tested the use of grid fins (essentially copied from SpaceX’s Falcon 9) to control the return flight of the first stage of their Long March 2C rocket.

The success of the test is of great significance for improving China’s inland rocket landing safety, minimizing the inconvenience to the local people, as well as promoting the follow-up development of carrier rockets’ controllable recovery, soft landing and reuse, according to He Wei, an official with the CASC.

“The swinging grid fins were used to control the rocket debris’ direction and attitude, much like the wings of the debris,” said Cui Zhaoyun, the deputy chief designer of Long March-2C rocket. The landing site control of large and medium rockets is much more difficult than that of small rockets, he added.

For almost forty years China has allowed these first stages to crash, sometimes very close to villages and habitable areas. Now, inspired by what freedom and U.S. innovation has accomplished, they have finally begun the process of figuring out how to land these stages vertically. Since their propellants are very toxic, it is not clear however whether they will be able to reuse them should they succeed in landing them undamaged.

The U.S. still leads China 15-11 in the national rankings.

China now leads the U.S. 30 to 26 in the national rankings. Its 30 launches this year smashes its previous launch high of 20 successful launches, and suggests that China is going to come close to its predicted 40 launches for 2018. 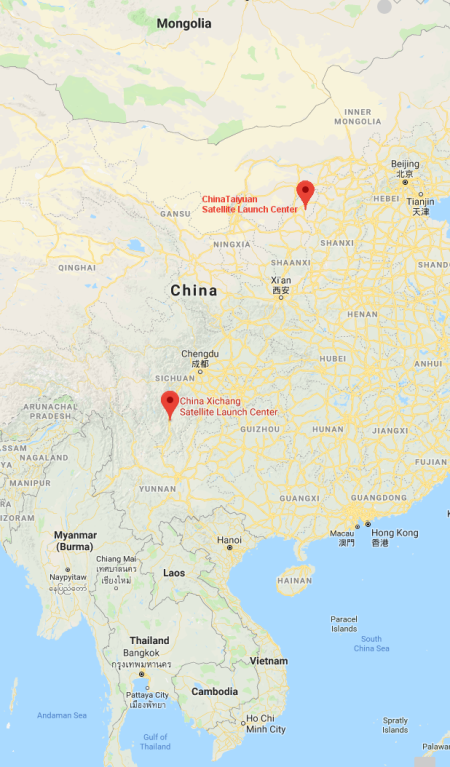 Though this is the same rocket that dropped its upper stage near a Chinese town in June, the launch came from the Taiyuan launch site, not the Xichang launchsite used in June, so it is unclear if the upper stages fell near populated areas. I would expect so, however, since Taiyuan is located in the middle of China even closer to populated areas than Xichang, as shown on the map to the right.

If the launch went north from Taiyuan, then those upper stages probably landed in Mongolia. I wonder if China has worked out an agreement with that country about dropping toxic first stages onto its territory.

Regardless, in the 2018 launch standings, China now leads the U.S. 24-22. The leaders in the race, with the leading U.S. companies broken out, are as follows:

As mentioned previously, with every launch for the rest of the year China will set a new annual record for itself.

Footage showing the first stage from yesterday’s Long March 2C launch crashing into a city has now been released.

The Chinese government issues warnings and even evacuates areas calculated to be under risk of impact during these interior launches, but it appears that many locals stick around to film the event. I have embedded below the fold this most recent footage.

The fuel from the first stage of the Long March 2C is very toxic, so China is increasingly facing a bad PR problem they don’t want. They are using their space program, much like the Soviets did, to highlight China’s new first world status. Images of an out-of-control rocket crashing into populated areas does not serve that purpose well. Expect them to accelerate their efforts to either develop reusable first stages, and to abandon this launch site.
END_OF_DOCUMENT_TOKEN_TO_BE_REPLACED

No further information about the satellites was released. The Long March 2C is comparable to India’s PSLV rocket, and thus is used for smaller payloads.

This launch puts China ahead of the U.S. in the national race, 18-17, though SpaceX’s Dragon launch later this week should tie things up again.