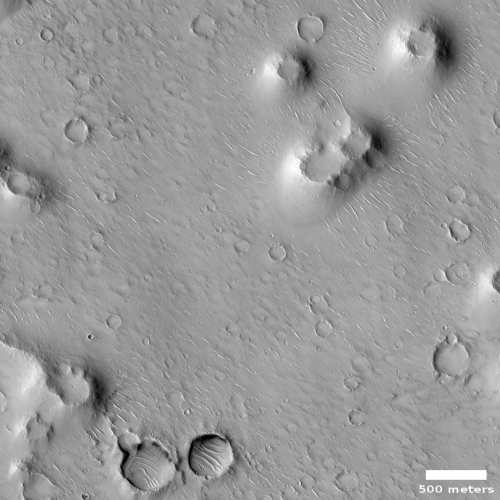 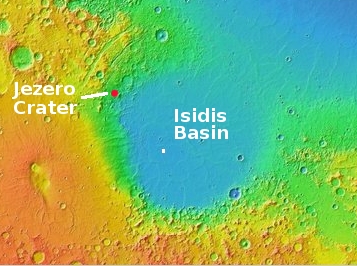 Today’s cool image to the right, cropped and reduced to post here, highlights the floor of one of Mars’ largest basins, dubbed Isidis Planitia, and located at the transition zone between the planet’s northern lowland plains and the southern cratered highlands.

The overview map below of Isidis Basin provides some context. The white box shows where this particular image is located. Jezero Crater, indicated by the red circle (which is also about the size of the crater), is where the rover Perseverance is going to land and roam come February 2021, should all go well. For scale, Isidis is about the size of the eastern half of the United States. If Chicago was located at Jezero Crater, Baltimore would be on the basin’s eastern edge, at around 4 o’clock.

This particular section of the full photo, taken on April 5, 2020 by the high resolution camera on Mars Reconnaissance Orbiter (MRO), shows many features very typical of the floor of Isidis Basin, which also immediately reveal a great deal about its possible history.

In this small snippet we can see what at first glance appear to be pedestal craters standing up like mesas, with ordinary craters scattered about on that lower surrounding terrain. Clearly, if these are pedestal craters they had to have been created first, and then over a very long time erosion processes ate away at that plain, leaving these pedestals (which had become resistant to erosion because the impact had packed their material together and made it harder) behind as mesas.

Then, after this period of erosion was complete enough additional time was required for at least one or two rounds of cratering to occur, leaving behind the many more younger craters on the plain floor, many of which are now partly buried by dust and sand.

The problem is that these mesas are almost certainly not pedestal craters, despite their appearance. END_OF_DOCUMENT_TOKEN_TO_BE_REPLACED

A JPL press release today outlines some of the main engineering differences between Curiosity, the rover that has been exploring Gale Crater for the past fifteen years, and Mars2020, the unnamed rover that will be launched in July 2020 to explore Jezero Crater

One of the major the engineering improvements, based on what was learned with Curiosity, are the Mars2020 wheels:

Curiosity has prepared Mars 2020’s team for “off-roading” on the Red Planet. When holes began appearing in the veteran rover’s aluminum wheels, engineers realized that sharp rocks cemented on the Martian surface exert more pressure on the wheels than expected. Careful drive planning, along with a software upgrade, will keep them in shape for the rest of Curiosity’s journey up Mount Sharp.

While Mars 2020’s wheels are made from the same materials, they’re slightly bigger and narrower, with skins that are almost a millimeter thicker. Instead of Curiosity’s chevron-pattern treads, or grousers, Mars 2020 has straighter ones and twice as many per wheel (48 versus 24). Extensive testing in JPL’s Mars Yard has shown these treads better withstand the pressure from sharp rocks but work just as well on sand.

The computer and software has also been upgraded to speed daily operations. In addition, the new rover will have 23 cameras, six more than Curiosity, all of which will be capable of producing color images. And most important, the drill will be larger and will drill cores for obtaining samples that will be stored for possible return by a later mission.

The landing is set for February 18, 2021. If all goes well this rover will be exploring the Martian surface well in to the 2030s.