Summary: Curiosity finally on the move after several months drilling two adjacent holes in the clay unit. Yutu-2 continues roving west, has it now operates during its eleventh lunar day on the far side of the Moon.

I have not done any of my regular rover updates since May 30, 2019 because it was simpler to do individual updates for both Curiosity and Yutu-2, the only working rovers presently on other worlds. (If things had gone well, which they did not, we would have had two other lunar rovers in the past six months, one from Israel and one from India, but both crashed during landing.)

However, since Curiosity is finally on the move after spending several months at one location, where it drilled two holes in the clay unit (the material from one used in a wet cup experiment to look for organic life) it is time to update my readers on where Curiosity is and where it is heading.

The first image above and to the right is an annotated overview of Curiosity’s present position, moving south to a line of buttes which scientists have determined delineates the transition from the clay unit to a new geological layer they have dubbed the Greenheugh Pedimont. The yellow lines indicate the area seen in the panorama below, created from two photographs (here and here) taken by the rover’s navigation camera.

The red dotted line in the first image above shows their original planned route for the rover, with the thin yellow lines indicating where it has actually traveled. They are now heading south, back to their original route, to the nose of the central butte in the above picture, which they have creatively dubbed “Central Butte.” Once closer the rover will “start investigating the laminations that outcrop there.” Laminations is the geologist’s more technical word for layers, which this butte is clearly chock full of.

Below is an oblique illustration of Curiosity’s future travels, released by the Curiosity science team on May 15, 2019. I have added some annotations while reducing the image to post here. The yellow lines once again roughly show the area seen in the image of Central Butte above. 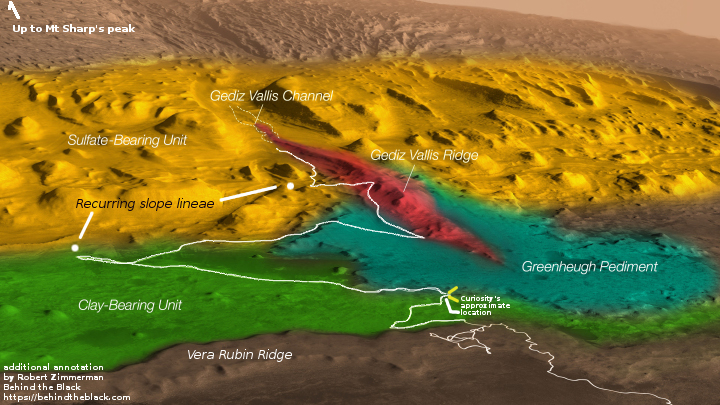 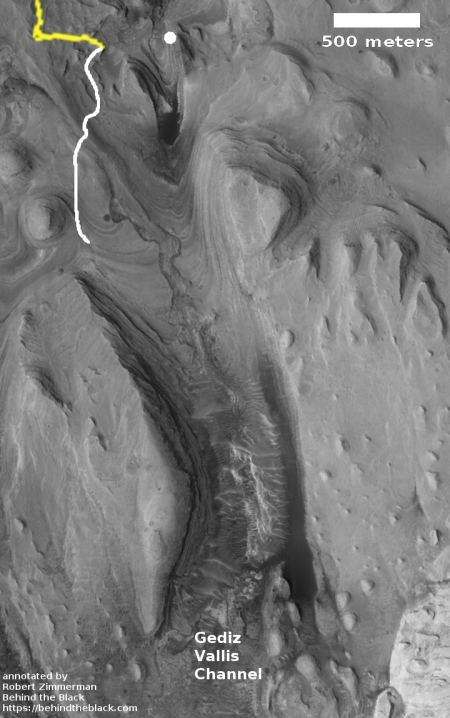 The most significant future targets for the rover are the two recurring slope lineae, both of which are dark streaks that appear to darken and fade in line with the seasons, suggesting the presence of some form of seep, possibly water.

To the right is the Mars Reconnaissance Orbiter (MRO) high resolution image of Gedis Vallis Channel that I first posted on December 19, 2018. I have annotated it to to show the route that is presently planned into that canyon. My words written then require repeating:

Sadly for tourists like myself, Curiosity will probably not get to Gedis Vallis for at least two more years, if not longer. First the scientists will want to spend some time studying Central Butte. Then the rover will have to travel a considerable distance east to that first recurring slope lineae, where the scientists will certainly wish to spend a lot of time, probably at least two seasons, to observe the changes the lineae undergoes over time. They will then have to work their way west and up unto the Greenheugh Pediment, a journey that will be spectacular in its own way as it will be skirting some interesting mountain slopes to the south.

Only then, probably three to four years hence, will they begin working their way into Gediz Valles Channel. Let us all hope that Curiosity can keep functioning during that whole time, because if it does the journey will be surely wonderful to follow.

As reported by the state media in China, Yutu-2 and its lander Chang’e-4 are presently functioning normally and have been activated for work on their eleventh lunar day on the Moon’s far side.

Overall the rover has been steadily moving west from Chang’e-4 since it began its journey in January. It has now traveled about 950 feet or 290 meters. The Chinese press generally releases little information about the rover’s work, though they have revealed a bit more about the glassy impact melt material the rover inspected during its ninth lunar day.

Europe’s ExoMars2020 rover mission has had more serious problems. They have not yet assembled the entire payload, as the rover, lander, and other components are presently undergoing their own separate testing.

More significant have been their parachute problems. They have yet to fly a successful parachute test, and are now planning a new campaign of flight tests in the first quarter of 2020. The odds of them solving these issues, and getting the vehicle assembled in time for its July 2020 launch, seems very daunting. I would not be surprised if the launch is delayed until the next launch window in 2022.

This week NASA announced a new rover for the Moon, dubbed VIPER, aimed at exploring the lunar south pole by December 2022.

This list is probably not complete, as China is likely planning later rovers, Israel has said it will try to launch a second Beresheet rover, and India will likely try again. Nor should we ignore Japan, Russia, and a plethora of private American companies. In the coming decades expect a lot of rovers on a lot of planets.