The final words in Reagan’s speech come from a poem by John Gillespie Magee, Jr.

Oh, I have slipped the surly bonds of earth,
And danced the skies on laughter-silvered wings;
Sunward I’ve climbed and joined the tumbling mirth
Of sun-split clouds — and done a hundred things
You have not dreamed of — wheeled and soared and swung
High in the sunlit silence. Hov’ing there,
I’ve chased the shouting wind along and flung
My eager craft through footless halls of air.
Up, up the long, delirious, burning blue
I’ve topped the wind-swept heights with easy grace,
Where never lark, or even eagle flew;
The high, untrespassed sanctity of space,
Put out my hand, and touched the face of God.

Showing how the country is polarized . . . with a t-shirt

Want to find out how polarized our county is? Then wear this shirt (which can be purchased here) and watch the reaction. 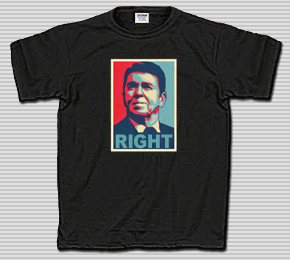 How do I know this? Well, yesterday on my flight home from California after giving a lecture to the Orange County section of the American Institute of Aeronautics and Astronautics, I tried it. Nor was this the first time I’ve worn this shirt and seen the reactions. People always seem to notice it, often doing a doubletake because at first they think it is the Obama image with the word “Hope” underneath. Then they realize what it really is, and either laugh in amusement or frown in annoyance.

Yesterday was no different. As I stepped out of the elevator and into the lobby of my California hotel, I passed a woman whose eyes immediately widened when she saw the shirt, and then scowled as she walked past. Then, I went into a local Subway to pick up something to eat during the long flight home. The woman who made my sub as well as the clerk who took my cash both looked at my shirt and glowered. Though they did nothing outright rude, I really think they would have preferred to tell me to leave and not sell me my sub.

At the airport things were interestingly different. Two guys in front of me on line to check bags immediately wanted to know where they could buy the shirt. Then, on the airplane, a steward as well as the passenger sitting next to me asked me the same question. When I said I’d forward them the webpage if they’d give me their email addresses, they all complied eagerly. The steward then went out of his way for the rest of the flight to make sure I was happy, to which I remain grateful.

Though I do find these reactions both amusing and intriguing, I also find them disturbing. How can a free nation survive if people get so emotional over something so silly as a t-shirt?