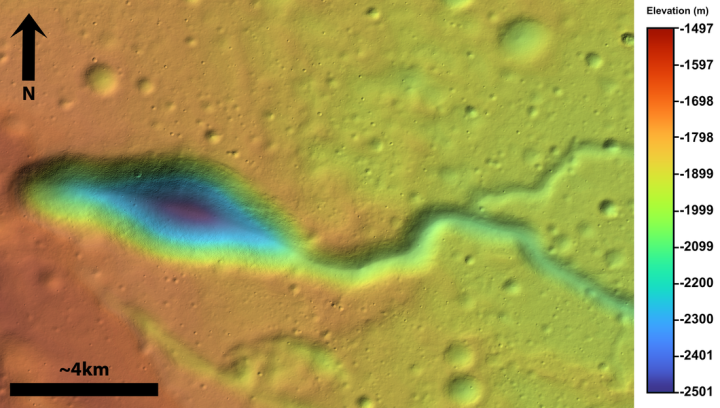 Cool image time! The image above, reduced to post here, is a colorized digital terrain model produced from Lunar Reconnaissance Orbiter (LRO) data. On top of the original mosaic of photos the LRO science team has overlaid the elevation data obtained by LRO’s laser altimeter. It shows a tadpole shaped pit dubbed Kathleen, with its tail trailing off to the southeast. As they note:

Kathleen is a pyroclastic vent with a sinuous rille (colloquially known as Rima Mozart [Not IAU confirmed]) that extends from the southeast end of the vent. Rilles are large channels formed by sustained channelized lava flows. This vent is a great location to investigate ancient volcanism on the Moon.

The elevation data reveals one interesting feature: The lowest part of the vent pit is not at its western end, where one would think at first glance, based on the general dip that produced the rill flowing to the east. That the lowest point is at the widest section of the pit instead suggests that this pit no longer looks as it did when it was venting. In the almost four billion years since it is thought all volcanic activity here ceased, there has been plenty of time for the slow erosion processes on the Moon, caused by radiation, micrometeorites, and the solar wind, to partly fill this pit and round out its cliff walls.

The two overview maps below provide some context.
END_OF_DOCUMENT_TOKEN_TO_BE_REPLACED