Gale Crater dunes: dry and volcanic in origin
December 27, 2018 at 8:26 am Robert Zimmerman Points of Information

Using data from orbit and from the rover Curiosity, scientists have determined that the material in the dunes in Gale Crater that Curiosity has visited are very dry and volcanic in origin.

This dryness is in contrast with the underlying ground, which shows evidence of water. The data also suggests that the material either came from multiple volcanic sources producing different compositions, or some of the sand was somehow changed at a later time.

In other words, the sand in the dunes came from elsewhere.

The dunes of Titan
January 23, 2012 at 1:24 pm Robert Zimmerman Points of Information

The dunes of Titan.

The Winds of Mars 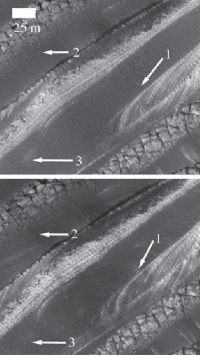 In two different papers published in two different journals in the past month, scientists have concluded that — despite the thinness of the planet’s atmosphere — the dunes and sands of Mars are being continually shaped and changed by its winds. In both papers the data from which this conclusion was drawn came from high resolution images taken by the HiRISE camera on Mars Reconnaissance Orbiter.

What is especially interesting about this conclusion is that the climate models that had been developed for the Martian atmosphere, combined with wind measurements gathered by the various Martian landers, had all suggested that the kind of strong winds necessary to move sand were rare. To quote the abstract of the paper published on Monday in the journal Geology, Bridges, et al,

Prior to Mars Reconnaissance Orbiter data, images of Mars showed no direct evidence for dune and ripple motion. This was consistent with climate models and lander measurements indicating that winds of sufficient intensity to mobilize sand were rare in the low-density atmosphere.

results from wind tunnel simulations and atmospheric models show that such strong wind events should be rare in the current Martian atmospheric setting.

Yet, both studies found significant evidence that such winds do occur on Mars, and are moving sand in many different places.
END_OF_DOCUMENT_TOKEN_TO_BE_REPLACED