The uncertainty of modern climate science isn’t merely because of the overall complexity of the data and the climate. Though there are numerous factors that contribute to the long term fluctuations of the climate that we do not yet completely understand or can quantify with any precision (the sun, dust, soot, volcanoes, carbon dioxide increase, to name just a few), there is a more tragic uncertainty that global warming scientists at NASA and NOAA have added to the mix, one that is entirely unjustified and harmful to the field of science and the questions that it is trying to answer.

In the case of this post, that tragic uncertainty has to do with sea level rise and the “adjustments,” without explanation, that NASA is making to its sea level data. Below is a graph taken from the link, showing the changes that have been made to published data from 1982 in order to eliminate a long period of almost no sea level rise from the mid 1950s through 1980.
END_OF_DOCUMENT_TOKEN_TO_BE_REPLACED

The uncertainty of science: Despite the claims that human-caused global warming is causing the icecaps to melt and the sea to rise, four different research papers this year have found no “observable” evidence linking human activity to sea level rise.

“It is widely assumed that sea levels have been rising in recent decades largely in response to anthropogenic global warming,” Kenneth Richard writes at NoTricksZone. “However, due to the inherently large contribution of natural oscillatory influences on sea level fluctuations, this assumption lacks substantiation…. Scientists who have recently attempted to detect an anthropogenic signal in regional sea level rise trends have had to admit that there is ‘no observable sea-level effect of anthropogenic global warming’,” Richard points out, listing four peer-reviewed studies published this year that have all come to the same conclusion.

Does this prove that the rise in sea levels is not influenced by human activity (or “an anthropogenic signal” to use the jargon of these scientists)? Absolutely not. What it does show is that the science of climate change remains completely uncertain, and that it is very possible that all of the sea level rise we see has nothing to do with human activity, something that many climate scientists have recognized for decades. We are still coming out of the last ice age, and these scientists recognize that much if not all of the sea level rise we see can be attributable to this fact.

After more than eleven years, the sea-level tracking satellite Jason-1 has finally shut down.
July 3, 2013 at 5:17 pm Robert Zimmerman Points of Information

After more than eleven years, the sea-level tracking satellite Jason-1 has finally shut down.

New research has found that from 20,000 to 7,000 years ago Great Britain was surrounded by a vast area of dry land that reached as far as Denmark.
July 3, 2012 at 4:07 pm Robert Zimmerman Points of Information

New research has found that from 20,000 to 7,000 years ago Great Britain was surrounded by a vast area of dry land that reached as far as Denmark.

The research suggests that the populations of these drowned lands could have been tens of thousands, living in an area that stretched from Northern Scotland across to Denmark and down the English Channel as far as the Channel Islands.

As the ice age ended and sea levels rose, this land was slowly swamped and engulfed by the North Sea.

A new study has found that the glaciers of Greenland are not behaving as predicted.
May 3, 2012 at 1:27 pm Robert Zimmerman Points of Information

The uncertainty of science: A new study has found that the glaciers of Greenland are not behaving as predicted.

In northwestern Greenland, for example, where most of the glaciers move relatively quickly and flow directly into the sea rather than ending on land, average speed jumped by 8% between 2000 and 2005 and rose another 18% from 2005 to 2010. Nevertheless, the researchers report online today in Science, the glaciers in this region showed no uniform pattern of acceleration. About one-third flowed at the same rate throughout the decade, one-fourth slowed during the interval, and about 15% slowed during the first half of the decade and then surged from 2005 to 2010.

Similarly, many of the individual glaciers in southeastern Greenland don’t follow the region’s overall trend. Although the average speeds for these glaciers increased by 28% over the decade, substantial accelerations by some glaciers were balanced by considerable slowing by others. About 43% of the glaciers in the region sped up between 2000 and 2005, but around 25% slowed down by more than 15% from 2005 to 2010.

In other words, if there is any warming, it hasn’t manifested itself in a predictable manner in the glaciers of Greenland. In fact, the data above suggests instead that if there has been any warming, it either has been far less than predicted, or has had relatively little influence on the Greenland ice sheet. 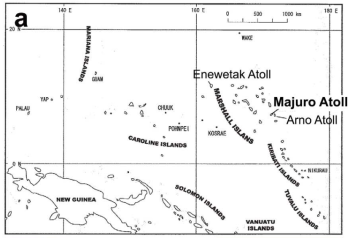 What they found was that the Atoll emerged from underwater approximately 2000 years ago, triggered by a fall in sea level. More surprising, the first evidence of human settlement appeared to occur at almost the same time.
END_OF_DOCUMENT_TOKEN_TO_BE_REPLACED

In a paper published in Geophysical Research Letters of the American Geophysical Union (AGU) earlier this month, climate researchers have found that another prediction in the UN’s IPCC reports — what Al Gore likes to call “settled science” — is simply wrong, and that IPCC’s predicted rise in sea level over the next century is likely not going to happen.
END_OF_DOCUMENT_TOKEN_TO_BE_REPLACED

A university research center is under attack for arbitrarily adjusting its sea-level data upward.

An inconvenient truth: New data now shows that since 2003, the rate of sea level rise has stablized, and since 2007, the rate of increase has actually slowed.

“Worldwide-temperature increase has not produced acceleration of global sea level over the past 100 years”
March 28, 2011 at 2:15 pm Robert Zimmerman Points of Information

From Watts Up With That: New sea level data shows that there has been “no acceleration of global sea level over the past 100 years,” despite the increase in temperatures. Key quote from the paper:

It is essential that investigations continue to address why this worldwide-temperature increase has not produced acceleration of global sea level over the past 100 years, and indeed why global sea level has possibly decelerated for at least the last 80 years.