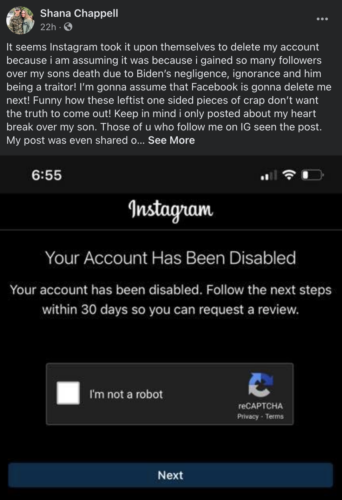 The new dark age of silencing: Apparently because her posts on Instagram and Facebook were highly critical of Democrat President Joe Biden, both social media companies immediately either shut down or restricted the accounts of Shana Chappell, the mother of one of the soldiers killed in the Kabul Airport suicide bombing.

The mother of a Marine killed in the suicide bombing in Kabul, Afghanistan, last week had her account removed from Instagram and “incorrectly deleted” from Facebook following her fierce criticism of President Biden in the wake of her son’s death.

Shana Chappell, the mother of Kareem Nikoui, 20, took to Facebook on Monday to slam Instagram for removing her account after she started posting about what happened to her son and her belief that Biden is to blame. Chappell claimed the social media platform started to flag several of her “posts from months ago,” and began to send her warnings that she could have her account disabled.

“It seems Instagram took it upon themselves to delete my account because i am assuming it was because i gained so many followers over my sons death due to Biden’s negligence, ignorance and him being a traitor,” she wrote on Facebook. “I’m gonna assume that Facebook is gonna delete me next! Funny how these leftist one sided pieces of crap don’t want the truth to come out!

It appears both Instagram and Facebook have since restored her accounts and apologized, with both saying that her account was “accidentally deleted.” Hogwash. These actions are never an accident. They are almost always against people criticizing the left or the Democratic Party (I repeat myself), with many such bannings never explained or corrected.
END_OF_DOCUMENT_TOKEN_TO_BE_REPLACED