Orbex unveils a full-scale prototype of its Prime smallsat rocket
May 11, 2022 9:46 am Robert Zimmerman 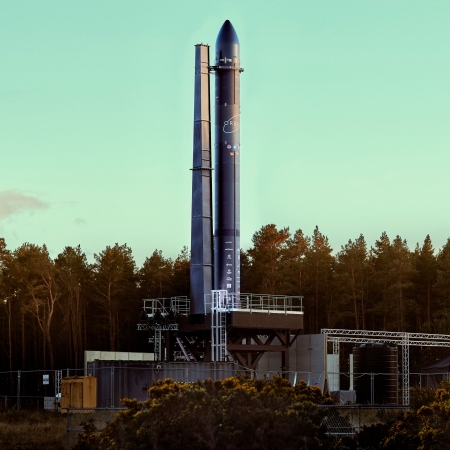 Capitalism in space: Orbex today unveiled a full-scale prototype of its Prime smallsat rocket, positioned on its own launchpad at the Sutherland Space Hub spaceport in Scotland, now under construction.

The photo to the right shows that prototype, held vertical with its own strongback. From the press release:

With the first full integration of the Orbex rocket on a launch pad now complete, the company is able to enter a period of integrated testing, allowing dress rehearsals of rocket launches and the development and optimisation of launch procedures. Orbex recently revealed their first test launch platform at a new test facility in Kinloss, a few miles from the company’s headquarters at Forres in Moray, Scotland.

Note that Sutherland Space Hub is not the SaxaVord Shetland Island spaceport also being developed in Scotland. The two are competing with each other to successfully complete the first launch from the United Kingdom in history. Also competing for this honor is an airport in Cornwall, which has a deal with Virgin Orbit to do its own launch later this year. And regardless who wins this race, the three sites will likely give the UK the first European-based spaceports in history.

The United Kingdom’s decision in 2016 to shift from a single government-run spaceport to competition and capitalism appears to be now finally paying off.