The make-up and temperature of Uranus’s rings
June 20, 2019 at 10:34 am Robert Zimmerman Points of Information

New radio images taken by the ground-based telescopes by the ALMA and VLT telescopes in Chile have allowed scientists to better determine the make-up and temperature of the rings of Uranus.

The image above is from their paper. From the caption:

From the article above:

The new images taken by the Atacama Large Millimeter/submillimeter Array (ALMA) and the Very Large Telescope (VLT) allowed the team for the first time to measure the temperature of the rings: a cool 77 Kelvin, or 77 degrees above absolute zero — the boiling temperature of liquid nitrogen and equivalent to 320 degrees below zero Fahrenheit.

The observations also confirm that Uranus’s brightest and densest ring, called the epsilon ring, differs from the other known ring systems within our solar system, in particular the spectacularly beautiful rings of Saturn.

“Saturn’s mainly icy rings are broad, bright and have a range of particle sizes, from micron-sized dust in the innermost D ring, to tens of meters in size in the main rings,” said Imke de Pater, a UC Berkeley professor of astronomy. “The small end is missing in the main rings of Uranus; the brightest ring, epsilon, is composed of golf ball-sized and larger rocks.” [emphasis mine]

The mystery is why this ring has no dust, something not seen with any other ring system in the solar system, including the inner rings of Uranus itself..

New Hubble images of Uranus and Neptune
February 7, 2019 at 9:28 am Robert Zimmerman Points of Information 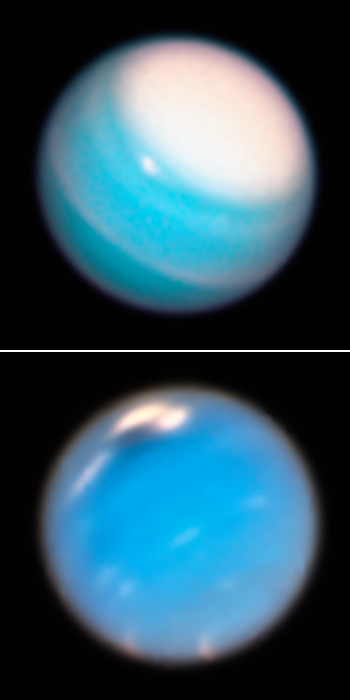 The Hubble Space Telescope’s new annual images of Uranus (top) and Neptune (bottom) has revealed new atmospheric features for both, a giant north pole cloud cap on Uranus and a new dark storm developing on Neptune.

The new Hubble view of Neptune shows the dark storm, seen at top center. Appearing during the planet’s southern summer, the feature is the fourth and latest mysterious dark vortex captured by Hubble since 1993. Two other dark storms were discovered by the Voyager 2 spacecraft in 1989 as it flew by the remote planet. Since then, only Hubble has had the sensitivity in blue light to track these elusive features, which have appeared and faded quickly. A study led by University of California, Berkeley, undergraduate student Andrew Hsu estimated that the dark spots appear every four to six years at different latitudes and disappear after about two years.

Hubble uncovered the latest storm in September 2018 in Neptune’s northern hemisphere. The feature is roughly 6,800 miles across.

The snapshot of Uranus, like the image of Neptune, reveals a dominant feature: a vast bright cloud cap across the north pole.

Scientists believe this feature is a result of Uranus’ unique rotation. Unlike every other planet in the solar system, Uranus is tipped over almost onto its side. Because of this extreme tilt, during the planet’s summer the Sun shines almost directly onto the north pole and never sets. Uranus is now approaching the middle of its summer season, and the polar-cap region is becoming more prominent. This polar hood may have formed by seasonal changes in atmospheric flow.

The images are part of an annual program that monitors both planets with images every year when the Earth is best placed to view them. This allows scientists to track atmospheric changes over time.

The sharpness of both images matches that of previous Hubble images, so these photographs do not show any decline in the telescope’s image capability. However, when they lose that next gyroscope and shift to one gyroscope mode, I believe it will be very difficult to get images even this sharp of the outer planets. In fact, I suspect this monitoring program will likely have to end, or will be badly crippled.

Uranus’s magnetic field switches on and off daily
June 28, 2017 at 9:54 am Robert Zimmerman Points of Information

Using data from the Voyager 2 flyby of Uranus in 1986, scientists now think that the gas giant’s magnetic field switches on and off each day as the planet rotates.

Uranus’s magnetosphere, in contrast [to Earth], exhibits precise regularity in its mode changes. This, say the researchers, is because it lies at an angle of roughly 60 degrees to the planet’s spin axis, causing its interaction with incoming solar winds to vary dramatically during the 17 hours it takes for a full rotation. “Uranus is a geometric nightmare,” says Paty.

“The magnetic field tumbles very fast, like a child cartwheeling down a hill head over heels. When the magnetised solar wind meets this tumbling field in the right way, it can reconnect and Uranus’s magnetosphere goes from open to closed to open on a daily basis.”

The researchers suggest the robust and regular changes to the magnetosphere may mean that the icy planet has spectacular auroras across its breadth every day.

Giant storm on Uranus
August 7, 2014 at 10:56 am Robert Zimmerman Points of Information

Astronomers using the ground-based Keck Observatory have imaged the sudden growth of what they call a “montrous” storm on Uranus.

Tallest Known Cliff in the Solar System
April 5, 2011 at 11:30 am Robert Zimmerman Points of Information

The tallest known cliff in the solar system.