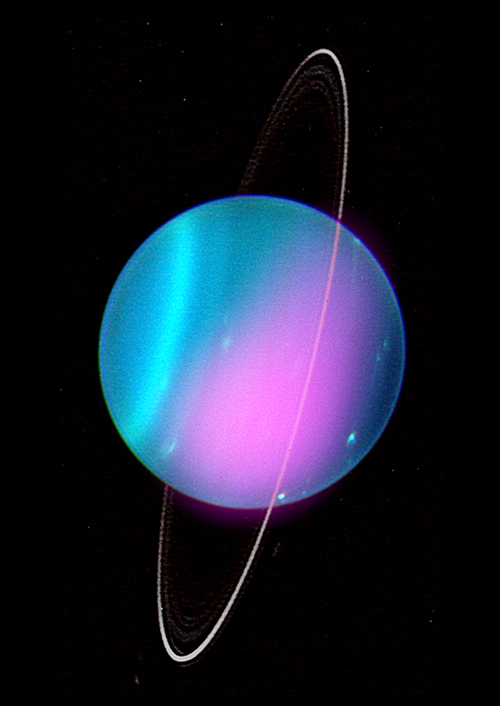 Astronomers using the Chandra X-ray Observatory in orbit have for the first time detected X-rays coming from the planet Uranus.

In the new study, researchers used Chandra observations taken in Uranus in 2002 and then again in 2017. They saw a clear detection of X-rays from the first observation, just analyzed recently, and a possible flare of X-rays in those obtained fifteen years later. The main graphic [posted to the right] shows a Chandra X-ray image of Uranus from 2002 (in pink) superimposed on an optical image from the Keck-I Telescope obtained in a separate study in 2004. The latter shows the planet at approximately the same orientation as it was during the 2002 Chandra observations.

What could cause Uranus to emit X-rays? The answer: mainly the Sun. Astronomers have observed that both Jupiter and Saturn scatter X-ray light given off by the Sun, similar to how Earth’s atmosphere scatters the Sun’s light. While the authors of the new Uranus study initially expected that most of the X-rays detected would also be from scattering, there are tantalizing hints that at least one other source of X-rays is present.

One explanation could be that the X-rays could be coming from Uranus’s rings, as such X-rays do from Saturn. This is not confirmed as yet however. More data will be needed.