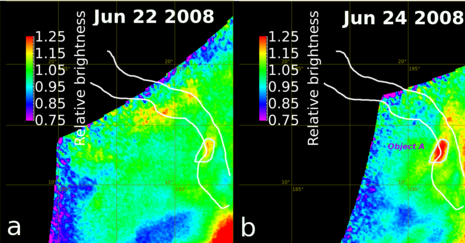 Using a near-infrared channel of the spacecraft’s Venus Monitoring Camera (VMC) to map thermal emission from the surface through a transparent spectral window in the planet’s atmosphere, an international team of planetary scientists has spotted localised changes in surface brightness between images taken only a few days apart. “We have now seen several events where a spot on the surface suddenly gets much hotter, and then cools down again,” says Eugene Shalygin from the Max Planck Institute for Solar System Research (MPS) in Germany, and lead author of the paper reporting the results in Geophysical Research Letters this month. “These four ‘hotspots’ are located in what are known from radar imagery to be tectonic rift zones, but this is the first time we have detected that they are hot and changing in temperature from day to day. It is the most tantalising evidence yet for active volcanism.”

The hotspots are found along the Ganiki Chasma rift zone close to the volcanoes Ozza Mons and Maat Mons. Rift zones are results of fracturing of the surface, which is often associated with upwelling of magma below the crust. This process can bring hot material to the surface, where it may be released through fractures as a lava flow.

There have been hints of volcanic activity on Venus since Pioneer Venus Orbiter first circled the planet from 1978 to 1992. This appears to be the first solid evidence of it.

Five years later a second attempt to put a Japanese spacecraft into Venus orbit
February 6, 2015 at 9:55 am Robert Zimmerman Points of Information

If at first: After failing to place its Akatsuki spacecraft into orbit around Venus in 2010 because of a cracked engine nozzle, Japan has announced its plans for a new attempt later this year.

The attempt will be made on December 7. If successful, the spacecraft will begin studying Venus’s climate and atmosphere only a short time after the end of Europe’s very success Venus Express mission.

After this month of ‘surfing’ in and out of the atmosphere at low altitudes, the lowest point of the orbit was raised again through a series of 15 small thruster burns, such that by 26 July it was back up to about 460 km, yielding an orbital period of just over 22 hours. The mission then continued in a reduced science phase, as the closest approach of the spacecraft to Venus steadily decreased again naturally under gravity.

Under the assumption that there was some propellant still remaining, a decision was taken to correct this natural decay with a new series of raising manoeuvres during 23–30 November, in an attempt to prolong the mission into 2015. However, full contact with Venus Express was lost on 28 November. Since then the telemetry and telecommand links had been partially re-established, but they were very unstable and only limited information could be retrieved.

The agency has decided that further attempts to contact the spacecraft would essentially be a wasted effort, and has closed the books on this very successful mission. The spacecraft itself will soon burn up in Venus’s atmosphere when its orbit decays.

Engineers have been struggling to maintain contact with Venus Express, and have only been able to establish contact for intermittent periods.

Europe’s Venus Express was launched in November 2005 and got to the second planet from the Sun in April 2006, on what was originally a two-year mission. Since then it has sent data streaming back from its polar orbit.

But the probe’s days are numbered, and last month the flight control team at the European Space Operations Centre (ESOC) at Darmstadt, Germany, reported loss of contact with it. According to ESA’s Venus Express blog, it is possible that the remaining fuel on board the spacecraft was exhausted during recent manoeuvres and that the spacecraft is no longer in a stable attitude (the spacecraft’s high-gain antenna must be kept pointed toward Earth to ensure reliable radio contact).

They have been able to get bits of telemetry from the craft, but since its fuel supply is almost gone the possibility of keeping it operating much longer is limited.

Venus Express is alive
July 29, 2014 at 9:03 am Robert Zimmerman Points of Information

After diving into Venus’s atmosphere on an aerobraking test that could have destroyed the spacecraft, the European probe Venus Express has now successfully used its last bits of fuel to raise its orbit back to research height.

Its present orbit will probably decay sometime in December, when the spacecraft will burn up in the atmosphere. However, the scientists running the mission though that was likely to happen during the aerobraking maneuver. Instead, Venus Express is giving them about another half year of research.

Venus Express is coming up for less air
July 11, 2014 at 11:31 pm Robert Zimmerman Points of Information

Thus routine science operations concluded on 15 May, and the spacecraft’s altitude was allowed to drop naturally from the effect of gravity, culminating in a month ‘surfing’ between 131 km and 135 km above the surface. Additional small thruster burns were used to drop the spacecraft to lower altitudes, reaching 130.2 km earlier this week. Tomorrow, it is expected to dip to 129.1 km.

After eight years orbiting Venus, the mission is finally ending. They will use the spacecraft’s thrusters to lift it back up to almost 500 kilometers, where they will then allow its orbit to naturally decay, eventually ending the mission when it burns up in the atmosphere. There is also the chance they will run out of fuel during these last burns, ending the mission slightly sooner.

After concluding eight years of science observations in orbit around Venus, Venus Express is about to begin a series of atmospheric plunges to test the engineering of aerobraking at the extreme.
May 16, 2014 at 11:28 am Robert Zimmerman Points of Information

After concluding eight years of science observations in orbit around Venus, Venus Express is about to begin a series of atmospheric plunges to test the engineering of aerobraking at the extreme.

They plan to dive into Venus’s hellish atmosphere as low as 80 miles, where they hope not only to get data about this little studied region but to also learn more about the engineering of aerobraking. The article also gives a nice overview of the knowledge that Venus Express gathered in the past eight years.

After six years of study, Venus Express has found that during that time the super-rotating winds of Venus have actually increased in speed.
June 18, 2013 at 9:26 am Robert Zimmerman Points of Information

After six years of study, Venus Express has found that during that time the super-rotating winds of Venus have actually increased in speed.

When Venus Express arrived at the planet in 2006, average cloud-top wind speeds between latitudes 50º on either side of the equator were clocked at roughly 300 km/h [186 mph]. The results of two separate studies have revealed that these already remarkably rapid winds are becoming even faster, increasing to 400 km/h [250 mph] over the course of the mission.

Changes in the levels of sulphur dioxide since Venus Express arrived in orbit around Venus in 2006 now suggest strongly that the spacecraft has detected volcanic activity on the planet.
December 3, 2012 at 7:46 am Robert Zimmerman Points of Information

Changes in the levels of sulphur dioxide (SO2) since Venus Express arrived in orbit around Venus in 2006 now suggest strongly that the spacecraft has detected volcanic activity on the planet.

The SPICAV data show that the concentration of SO2 above the main cloud deck increased slightly to about 1000 parts per billion by volume (ppbv) between 2006 and 2007, but then steadily decreased over the next five years, reaching only 100 ppbv by 2012. This is very reminiscent of a pattern observed by Pioneer Venus during the 1980s, the only other multi-year dataset of SO2 measurements.

One of best explanations for these changes is a volcanic eruption back in 2006, which would have inserted a great deal of SO2 into the upper atmosphere. Since then, ultraviolet radiation from the sun has steadily destroyed it.

Despite lacking a magnetic field of its own, scientists have discovered magnetic storms surrounding Venus.1
April 5, 2012 at 11:45 am Robert Zimmerman Points of Information

Despite lacking a magnetic field of its own, scientists have discovered magnetic storms occurring in the space surrounding Venus.

The finding, reported today in Science1, suggests that magnetic reconnection may generate auroras on Venus, and could have contributed to the loss of a thick, water-rich atmosphere that scientists believe surrounded the planet during its early history, some 4 billion years ago.

Venus Express was blinded for four days after being hit by a coronal mass ejection from the Sun.
March 12, 2012 at 2:10 pm Robert Zimmerman Points of Information

Venus Express was blinded for four days last week after being hit by a coronal mass ejection from the Sun.

Is Venus’s day getting longer?
February 10, 2012 at 9:10 am Robert Zimmerman Points of Information

Is Venus’s day getting longer?

In the 1980s and 1990s, the Venera and Magellan orbiters made radar maps of the surface of Venus, long shrouded in mystery as well as a dense, crushing and poisonous atmosphere. These maps gave us our first detailed global view of this unique and hostile world. Over its four-year mission, Magellan was able to watch features rotate under the spacecraft, allowing scientists to determine the length of the day on Venus as being equal to 243.0185 Earth days. .

However, surface features seen by Venus Express some 16 years later could only be lined up with those observed by Magellan if the length of the Venus day is on average 6.5 minutes longer than Magellan measured. This also agrees with the most recent long-duration radar measurements from Earth.