The geology behind the Virginia earthquake of August 23
August 24, 2011 at 11:23 am Robert Zimmerman Points of Information

The geology behind the Virginia earthquake of August 23. And an even better analysis, with maps, can be found here.

Top 10 Most Wonderful Canyons in the World
August 24, 2011 at 11:20 am Robert Zimmerman Points of Information

The ten most wonderful canyons in the world. With pictures.

These canyons are beautiful, but I am baffled that the list excludes the Grand Canyon, even though they repeatedly compare these ten canyons to it.

According to the Congressional Budget Office, this year’s deficit will be about $1.28 trillion, the third highest deficit in history, exceeded only by the previous two budgets of the Obama administration.

Note also that any cuts mentioned in the above article are not cuts, merely reductions in the overall growth of government. (Another example of a journalist lying for the government.) All told, the federal government will still continue to grow in the next few years at a pace that far exceeds inflation, the economy, or anything you can imagine in the real world.

In a paper published in Geophysical Research Letters of the American Geophysical Union (AGU) earlier this month, climate researchers have found that another prediction in the UN’s IPCC reports — what Al Gore likes to call “settled science” — is simply wrong, and that IPCC’s predicted rise in sea level over the next century is likely not going to happen.
END_OF_DOCUMENT_TOKEN_TO_BE_REPLACED

“All three program estimates assume large, unsubstantiated, future cost efficiencies leading to the impression that they are optimistic,” the team said in its key findings. A risk assessment revealed the funding reserves projected for all three programs are insufficient, according to Booz Allen Hamilton. NASA has not disclosed its internal cost estimate for the Space Launch System. “Due to procurement of items still in development and large cost risks in the out years, NASA cannot have full confidence in the estimates for long-term planning,” the executive summary said.

This project is nothing more than Congressional pork. It will never get built. Sadly, it might waste a lot of money before it never gets built.

An evening pause: How about some tornadoes?

Blue Origin to do a test flight tomorrow
August 23, 2011 at 3:52 pm Robert Zimmerman Points of Information

Blue Origin, one of the four commercial companies NASA hopes to use to get crew up and down from ISS, plans to do a test flight tomorrow. Hat tip to SpaceRef.

This company, founded by Jeff Bezos of amazon.com, has generally released very little information about their effort. 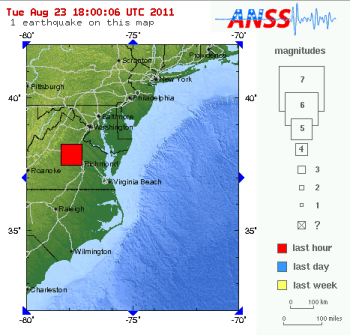 A 5.9 magnitude earthquake hit Virginia at about 1:51 pm (Eastern).

I am in Maryland, just outside the beltway, and felt something like an earthquake about five minutes ago. The house started to shake, then settled, then shook again. Quite startling. I opened the front door the same time a neighbor did. She had felt the same thing.

The above quake was more than 90 miles away. I wonder how bad it is there, considering the eastern U.S. rarely experiences quakes and has made no preparations for such a thing.

The module could be rented out as an ISS storage unit, making the station less dependent on frequent resupply flights, says Hiroshi Kikuchi of JAMSS. To show that the modules are capable of safe, crewed operation, Bigelow is also negotiating with NASA to attach one to a US-owned ISS module.

Crime rate drops in Virginia bars after concealed carry is allowed
August 23, 2011 at 9:49 am Robert Zimmerman Points of Information

“How dare this lawfare organization use lawfare against our boat.”
August 23, 2011 at 9:31 am Robert Zimmerman Points of Information

“How dare this lawfare organization use lawfare against our boat.”

The first earthrise
August 23, 2011 at 8:50 am Robert Zimmerman Points of Information

The religion of peace: Egyptians protest outside the Israeli embassy with swastika sign that says “The gas chambers are ready.”

More significantly, scientists now have no understanding why the ocean conveyor belt shut down during past ice ages, as their most favored theory now appears insufficient.
END_OF_DOCUMENT_TOKEN_TO_BE_REPLACED

Federal debt increased $4 trillion under Obama, the most under any president
August 22, 2011 at 8:59 pm Robert Zimmerman Points of Information

Just remember, it is never his fault: The federal debt increased $4 trillion under Obama, the most by any president.

An evening pause: Why I never get my information from television news.

Super-Earth spotted on the edge of habitable zone
August 22, 2011 at 5:56 pm Robert Zimmerman Points of Information

A super-Earth has been identified orbiting its star on the edge of the habitable zone.

Some good regulatory news: The FCC finally killed off the fairness doctrine today.

Below the fold are two images released today, one from Dawn at Vesta and the other from Messenger at Mercury. What makes them interesting to me is that, though the surfaces of both Vesta and Mercury are crater-packed, there are definitely distinct differences between them that one can spot if you look closely, all highlighting the fundamentally different environments of both worlds.

First, the Vesta photograph. The image looks out past the asteroid’s horizon, showing clearly that this dwarf planet is not spherical, with the south pole depression that puzzles scientists just on the planet’s limb. The parallel long deep grooves that are associated with this depression can be seen on the right. Notice also that the inside walls of all the craters slope downward in a very shallow manner. This gives the impression that the impacts that formed these craters smashed into an almost beachlike sandy surface. Note too the that the center of some craters have what appear to be flat small “ponds,” a phenomenon seen by the spacecraft NEAR when it orbited the asteroid Eros. These ponds are not liquid, but are actually made up of fine-grained particles that settle in the hollows of the asteroid.
END_OF_DOCUMENT_TOKEN_TO_BE_REPLACED

Feeling the pinch: A Florida university has shuttered its manned submersible research program after forty years of operation due to lack of funds.

NASA pushes for funds to save the James Webb Space Telescope
August 22, 2011 at 3:01 pm Robert Zimmerman Points of Information

NASA pushes for funds to save the James Webb Space Telescope.

The three missions are:

I especially like the solar sail mission because of its long range possibilities, though the other technologies would probably be put to practical use more quickly.

From a Democratic voter in blue-state New York, talking about Obama.

Early hints of the Higgs boson fade with fresh data.
August 22, 2011 at 9:23 am Robert Zimmerman Points of Information

Early hints that scientists had found the Higgs boson at CERN have faded with fresh data.

New data presented today at the Lepton Photon conference in Mumbai, India, show the signal fading. It means that “this excess is probably just a statistical fluctuation”, says Adam Falkowski, a theorist at the University of Paris-South in Orsay, France.

Bringing the Delta 2 back to launch unmanned science probes
August 22, 2011 at 9:19 am Robert Zimmerman Points of Information

Rocket shortage: NASA is reconsidering the Delta 2 rocket as a vehicle to launch its unmanned science satellites.

The day of reckoning looms: Social Security disability on the verge of insolvency.

One man’s response to Obama’s demand that taxes on the rich be raised
August 21, 2011 at 10:00 pm Robert Zimmerman Points of Information

One man’s response to Obama’s demand that taxes on the rich be raised.

I deeply resent that President Obama has decided that I don’t need all the money I’ve not paid in taxes over the years, or that I should leave less for my children and grandchildren and give more to him to spend as he thinks fit.

Governments have an obligation to spend our tax money on programs that work. They fail at this fundamental task. Do we really need dozens of retraining programs with no measure of performance or results? Do we really need to spend money on solar panels, windmills and battery-operated cars when we have ample energy supplies in this country? Do we really need all the regulations that put an estimated $2 trillion burden on our economy by raising the price of things we buy? Do we really need subsidies for domestic sugar farmers and ethanol producers?

The article covers the conflict that I described in this post, whereby NASA is abandoning the more flexible contracting approach used for the commercial cargo contracts of SpaceX and Orbital Sciences and going instead with the contracting system it used for all past NASA subcontracts.

The article is errs badly when it calls the new contracting approach that NASA wants to use “non-traditional.” It is instead the way NASA has been doing things for decades, whereby the agency takes full control of everything and requires contractors to fill out so much paperwork that the costs double and triple.