The most recent prediction now says that the UARS satellite will come down tonight between 9 pm and 3 am Eastern time, during one of four orbits, all of which pass over North America, Europe, and Africa. One orbit also passes over Australia.

While we chatter about superficial election debates and a falling satellite, the federal budget continues to crash and burn. What I find disturbing about the events in the Senate is this quote:

Democrats in the Senate, who are in the majority, oppose Republican efforts to roll back “green” energy programs to pay for aid for victims of Hurricane Irene and other disasters. They say disaster aid, usually a bipartisan issue, should not require cuts elsewhere — especially to programs creating green jobs — as the GOP majority in the House now demands. [emphasis mine]

So how do the Democrats expect to pay for this disaster aid? Will the money grow on trees?

The crash time of the UARS climate satellite has now been updated to a window lasting from 6 pm (Eastern) to 4 am (Eastern) tonight.

According to the map at the link, the U.S., Europe, Africa, and Middle East are all potential crash sites.

A second large satellite will rain debris down in October
September 23, 2011 at 10:06 am Robert Zimmerman Points of Information

Even if UARS misses you today, don’t relax! A second large satellite, the 2.4 ton ROSAT X-Ray space telescope, is going to rain debris down late in October or early November.

On its ROSAT website, DLR estimates that “up to 30 individual debris items with a total mass of up to 1.6 tonnes might reach the surface of the Earth. The X-ray optical system, with its mirrors and a mechanical support structure made of carbon-fibre reinforced composite – or at least a part of it – could be the heaviest single component to reach the ground.”

Couple hit with fines for holding a Bible study in their home
September 22, 2011 at 11:22 pm Robert Zimmerman Points of Information

A California couple has been hit with fines for holding a Bible study session in their home.

The first global map of the ocean’s saltiness
September 22, 2011 at 10:59 pm Robert Zimmerman Points of Information

The first global map of the ocean’s saltiness.

Astronomers argue about the legitimacy of the first exoplanet to be directly imaged
September 22, 2011 at 10:55 pm Robert Zimmerman Points of Information

Astronomers question the legitimacy of the first exoplanet to be directly imaged.

An evening pause: For the arrival of fall.

Times Atlas has backed down on its Greenland map and issued an apology
September 22, 2011 at 5:08 pm Robert Zimmerman Points of Information

The Times Atlas has backed down on its false claim of a 15% loss to the Greenland icecap due to global warming and has issued an apology.

An international team of scientists said on Thursday they had recorded sub-atomic particles traveling faster than light
September 22, 2011 at 5:03 pm Robert Zimmerman Points of Information

An international team of scientists said on Thursday they had recorded sub-atomic particles that travel faster than light.

A total of 15,000 beams of neutrinos — tiny particles that pervade the cosmos — were fired over a period of 3 years from CERN toward Gran Sasso 730 (500 miles) km away, where they were picked up by giant detectors. Light would have covered the distance in around 2.4 thousandths of a second, but the neutrinos took 60 nanoseconds — or 60 billionths of a second — less than light beams would have taken. “It is a tiny difference,” said Ereditato, who also works at Berne University in Switzerland, “but conceptually it is incredibly important. The finding is so startling that, for the moment, everybody should be very prudent.”

a new study shows that 790,000 Ohioans will lose their private health insurance and premiums will rise 55%-85% when Obamacare takes full effect in 2014
September 22, 2011 at 1:50 pm Robert Zimmerman Points of Information

Repeal it: A new study shows that in Ohio, 790,000 people will lose their private health insurance and premiums will rise 55%-85% when Obamacare takes full effect in 2014.

High school student suspended for saying “I’m a Christian. I think being a homosexual is wrong.”
September 22, 2011 at 1:46 pm Robert Zimmerman Points of Information

Freedom of speech alert: A high school suspended a student earlier this week for merely saying “I’m a Christian. I think being a homosexual is wrong.”

I could hear Andrey saying it was like an American amusement park
September 22, 2011 at 1:28 pm Robert Zimmerman Points of Information

Coming home in a Soyuz capsule: “I could hear Andrey saying it was like an American amusement park.”

The forecast of when and where the climate satellite UARS will re-enter the atmosphere has been narrowed to the afternoon/evening of Friday, September 23.

Archaeologists have uncovered evidence of an ancient shipyard near Rome, “the largest of its kind in Italy or the Mediterranean.” 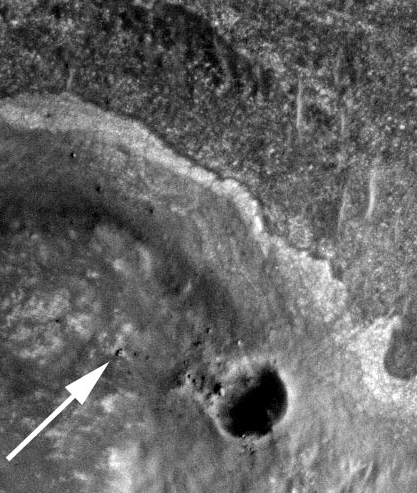 If so, the Democratic Party is doomed. Without the kneejerk 90%-plus support that blacks have been giving them for decades, there is a good chance the Democrats would unable to win almost any state- or nation-wide election.

We’re here to help you! The Philadelphia City Council wants to regulate the placement and color of residential satellite dishes.

On Thursday, Clarke is expected to offer final amendments to a bill requiring satellite companies to try to install dishes somewhere other than the front of a building. Roofs, rear or side yards, and backs of buildings all are acceptable, the bill says. The measure would also require some customers to paint their dishes to match the front of their buildings.

The bill would have funded the government at an annual rate of $1.043 trillion, in line with a bipartisan agreement reached in August. Many conservatives want to stick with the lower figure of $1.019 trillion that the House approved in April. The measure failed by a vote of 195 to 230, with 48 of the chamber’s most conservative Republicans joining Democrats in opposition. The vote demonstrated the continued reluctance of Tea Party conservatives to compromise on spending issues, even as the public grows weary of repeated confrontation on Capitol Hill. [emphasis mine]

I have highlighted the last line of the quote above to illustrate an example of Reuters inserting its own political agenda into a story, based not on facts but on fantasy and leftwing wishful thinking. Not only is there no indication that the public is “weary of repeated confrontation,” polls and recent special elections suggest that the public is instead quite weary of politicians unwilling to cut the federal budget. It is for this reason these conservative Republicans feel so emboldened. They know the political winds are at their backs.

With the Kyoto treaty expiring in 2012, Australia and Norway propose extending it until 2015
September 21, 2011 at 11:57 pm Robert Zimmerman Points of Information

With the Kyoto climate treaty expiring in 2012 and with almost no chance of a new treaty being agreed to this December at the next climate meeting in Durban, South Africa, Australia and Norway have proposed extending Kyoto until 2015.

The Australia-Norway submission calls for a new timetable to finalize an international treaty that would extend the Kyoto Protocol until 2015. Kyoto, which requires nearly 40 developed nations to cut greenhouse emissions by at least 5.2 percent less than 1990 levels by 2020 during the years 2008-12, is scheduled to expire in 2012. . . . The 2015 timetable is intended to “scale-up” international efforts on climate change to attain a global goal of limiting temperature rises below 2 degrees Celsius, the Australia-Norway proposal said.

What this tells me is that the chances of a new treaty are getting slimmer and slimmer. And I think that is good news, as we really have no idea what the climate is really doing, therefore making it very premature to write any treaty that limits human freedom. For all we know, the sun might be going quiet, which in turn could lead to global cooling.

But then, we don’t really know yet, do we? And without knowing a new climate treaty might do more harm than good.

Proposed changes in hardware specifications may make it impossible to run free operating systems such as Linux on computers.
September 21, 2011 at 11:04 pm Robert Zimmerman Points of Information

Proposed changes in computer hardware specifications may make it impossible to run free operating systems such as Linux.

The extension of Microsoft’s OS monopoly to hardware would be a disaster, with increased lock-in, decreased consumer choice and lack of space to innovate.

The article also notes how these restrictions might violate European Union competition law.

An evening pause: From the 1936 film Follow the Fleet

Repeal this turkey! A new survey now shows that thirty percent of employers will drop their health coverage under Obamacare.

Have doubts about the survey? Note that Former Democratic National Committee Chairman Howard Dean is quoted in the above article as finding it creditable.

WikiLeaks chief memoir published, against his will
September 21, 2011 at 1:06 pm Robert Zimmerman Points of Information

Talk about irony: The memoir of WikiLeaks founder Julian Assange has been published against his will.

Starting in December all GM cars with OnStar will record all data unless owners opt out
September 21, 2011 at 11:33 am Robert Zimmerman Points of Information

Starting in December, all GM cars with OnStar will record all data for police and insurance, unless the owner opts out.

General Motors and the government: what a team!

Police give ticket to citizen for directing traffic
September 21, 2011 at 8:46 am Robert Zimmerman Points of Information

Gerrish said Ehrlich cleared up the mess in 10 minutes. After 15 minutes, South Pasadena police say they finally received a call about their newest traffic officer, KCBS reported. Police responded to the scene and told Ehrlich to stop and issued him a ticket, but never stepped in to direct traffic themselves.

If this doesn’t illustrate the present madness of modern government, I don’t know what does. The proper answer by the police when they arrived should have been “Thank you, sir. We will take over now.” Instead, they do the exact opposite, punishing him while refusing to solve the problem.

Want to know where and when the six ton UARS satellite will hit the Earth this week? The Aerospace Corporation has it mapped!

Air Force official suggests they would be willing to sacrifice the X-37 in budget negotiations
September 20, 2011 at 10:50 pm Robert Zimmerman Points of Information

An Air Force official suggested this week they would be willing to sacrifice the X-37 in budget negotiations.