The Kepler team pushes for a mission extension in order to find Earth-sized planets.

The Kepler spacecraft has hit an unexpected obstacle as it patiently watches the heavens for exoplanets: too many rowdy young stars. The orbiting probe detects small dips in the brightness of a star that occur when a planet crosses its face. But an analysis of some 2,500 of the tens of thousands of Sun-like stars detected in Kepler’s field of view has found that the stars themselves flicker more than predicted, with the largest number varying twice as much as the Sun. That makes it harder to detect Earth-sized bodies. As a result, the analysis suggests that Kepler will need more than double its planned mission life of three-and-a-half years to achieve its main goal of determining how common Earth-like planets are in the Milky Way.

While it is important to find those Earth-sized planets, to me the important discovery here is that Kepler is confirming what previous research has suggested: Stars like our Sun are generally far more active and variable than the Sun itself. Which means that either the Sun is unusual, or has been unusually inactive during recorded human history.

The Lunar Reconnaissance Orbiter team have released new images of the Apollo 12, 14, and 17 landing sites on the Moon. Below is a cropped image of the Apollo 12 site, showing the trails left by astronauts Pete Conrad and Alan Bean when they walked from their lunar module to Surveyor 3, an unmanned lunar lander that had soft landed there two years earlier. The full image shows some incredible detail. 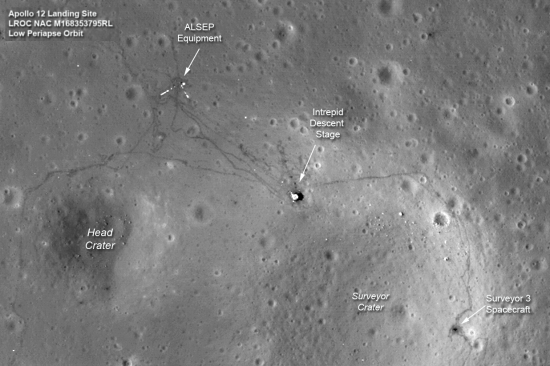 Some suggestions for keeping ISS occupied
September 6, 2011 at 9:06 am Robert Zimmerman Points of Information

Some suggestions for keeping ISS occupied.

I especially like Harman’s suggestion that the Russians consider landing in the U.S. during the winter, thereby allowing them to extend one crew’s occupancy of ISS into December, January, or even February. Also, he proposes the Russians send an unmanned Soyuz to ISS during testing of the rocket, thereby providing the crews onboard a fresh lifeboat. This is something they have done in the past on their previous space station Mir.

Awakening a science satellite dead for decades
September 6, 2011 at 8:46 am Robert Zimmerman Points of Information

Awakening the only British launched science satellite, dead for decades.

China’s space station will launch in late September
September 6, 2011 at 8:41 am Robert Zimmerman Points of Information

The launch of China’s first space station module has now been scheduled to late September.

Japan to ignite engine of failed Venus probe in anticipation of another try at Venus orbit
September 6, 2011 at 8:39 am Robert Zimmerman Points of Information

Japan plans to test fire the engine of its failed Venus probe Akatsuki twice this month, in anticipation of another try at Venus orbit in 2015.

Connie Dover – I am going to the west

An evening pause: Words and music by Connie Dover. With this video, it is the words that matter.

In this fair land, I’ll stay no more
Here labor is in vain
I’ll seek the mountains far away
And leave the fertile plain

Where castle rocks in towers high
Kneel to valleys wide and green
All my thoughts are turned to you
My waking hope, my sleeping dream
I am going to the West

Wind my blanket, earth my bed
My canopy a tree
Willows by the river’s edge
Will whisper me to sleep
I am going to the West

Leave a comment Connie Dover, entertainment, I am gong to the West, music

Ah, for just one time
I would take the Northwest Passage
To find the hand of Franklin
Reaching for the Beaufort Sea
Tracing one warm line
Through a land so wide and savage
And make a northwest passage to the sea.

The Riddle of Ancient Roman Concrete
September 3, 2011 at 12:45 am Robert Zimmerman Points of Information

The riddle of ancient Roman concrete.

After The Wall Street Journal reported on the failure, Blue Origin Friday posted a brief note on its website stating the spacecraft, while going faster than the speed of sound, suffered a “flight instability” at an altitude of 45,000 feet and the company’s automated “range safety system” shut off all thrust and led to its destruction. The problem appeared to stem from thrusters that didn’t respond properly to the initial commands, according to one industry official.

An evening pause: The last run on this highlight compilation is the one that ended his career.

And they think this is going to work? NASA to ask future lunar explorers to avoid Apollo landing sites in order to protect them from damage or looting.

Chang’e 2 has reached L2 almost a million miles from Earth
September 2, 2011 at 10:50 am Robert Zimmerman Points of Information

China delays launch of its first space station
September 2, 2011 at 10:47 am Robert Zimmerman Points of Information

China has delayed the launch of its first space station due to the failure of an earlier rocket launch.

An evening pause: Some breathtaking a cappela singing.

September 1, 2011 at 11:01 am Robert Zimmerman Essays And Commentaries 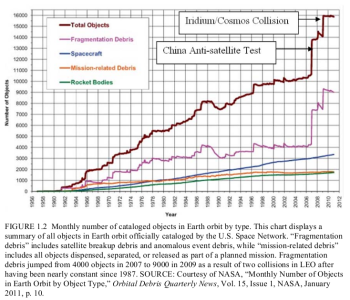 A just released National Research Council report on space junk, Limiting Future Collision Risk to Spacecraft: an assessment of NASA’s meteoroid and orbital debris programs, describes in great and worthwhile detail the increasing problem of orbital debris as well as the technical and budgetary problems that exist for removing it. It is especially worth reading for the stories, such as when a Colorado hiker heard a high-pitched sound and then found a still warm thirty-inch diameter sphere in a foot deep crater. The object turned out to be a titanium tank from a Russian upper stage rocket, launched two months earlier.

What I want to focus on here, however, is one issue the report discusses that, as far as I can tell, has generally been missed. Worse, this issue — somewhat ridiculous when you think about a little — will make removing most of the space junk in Earth orbit far more complicated than ever imagined by engineers.

Simply put, under already agreed-to international treaties, no nation can salvage or collect any debris placed in orbit by another nation. To do so will violate international law, and almost certainly cause an international incident. To quote the report:
END_OF_DOCUMENT_TOKEN_TO_BE_REPLACED

Why no one should want to live in California: A new proposed law there would require workers’ compensation benefits, rest and meal breaks and paid vacation time for babysitters.

Under AB 889, household “employers” (aka “parents”) who hire a babysitter on a Friday night will be legally obligated to pay at least minimum wage to any sitter over the age of 18 (unless it is a family member), provide a substitute caregiver every two hours to cover rest and meal breaks, in addition to workers’ compensation coverage, overtime pay, and a meticulously calculated timecard/paycheck.

Wisconsin teachers retire in droves
September 1, 2011 at 10:20 am Robert Zimmerman Points of Information

So it was for the children, eh? Wisconsin teachers retire in droves after new law is passed.

After tax hike Illinois loses more jobs than any other state
September 1, 2011 at 9:59 am Robert Zimmerman Points of Information

Following a tax hike in January 2011, Illinois has lost more jobs than any other state.

This isn’t rocket science, nor is the data hard to find. Whenever government spending and taxes grow, private business inevitably shrinks.

A new Florida state law will fine local governments for enforcing any local gun restrictions
September 1, 2011 at 9:56 am Robert Zimmerman Points of Information

This is a victory for freedom: A new Florida state law will fine local governments and their officials should they try to enforce any local gun restrictions.

All those ordinances have been illegal for years because state law prevents cities and counties from regulating guns. But a new law, set to take effect Oct. 1, takes it a step further. It allows judgments of up to $100,000 against local governments that enforce such laws. And, in an unusual move, the law also says local officials could be fired and fined $5,000, with no representation from the city or county attorney.

a Special Space and Aviation Artifacts Auction
September 1, 2011 at 9:41 am Robert Zimmerman Points of Information

Want a piece of space history? Over 800 space artifacts go up for auction beginning September 15. In addition to letters from Neil Armstrong and Alan Shepard, there’s this:

The First Lunar Bible: A flight-flown intact microfilm King James Bible containing all 1,245 pages. The bible was produced by the Apollo Prayer League, a group of NASA engineers, scientists, administrators and astronauts, and headed by NASA chaplain Rev. John Stout, who worked closely with the astronauts and NASA personnel. This lunar bible was originally slated to fly to the moon on Apollo 12, but a mistake on the lunar landing checklist resulted in the bible orbiting the moon in the Command Module. It was, then, placed on board Apollo 13, but due to a near-catastrophic explosion, the crew did not reach the moon, and instead returned along with the bible to Earth. Bibles were then given to Apollo 14 Lunar Module Pilot Edgar Mitchell who stowed them in his PPK bag and landed them safely on the moon February 5, 1971, on board lunar module Antares.

Adjusting the flight manifest to ISS
September 1, 2011 at 9:34 am Robert Zimmerman Points of Information

Pete Harding at NasaSpaceflight.com has written a very thorough review of the changes to the flight manifest to ISS expected due to the August 24 failure of the Soyuz-U rocket.

The space shuttle program officially ended on Wednesday
September 1, 2011 at 9:23 am Robert Zimmerman Points of Information

The space shuttle program officially ended on Wednesday. Note however:

Closeout of the shuttle program is an enormous effort expected to take two years. The program occupied 640 facilities and used more than 900,000 pieces of equipment with a value exceeding $12 billion, according to NASA. Much of the work will take place at Kennedy Space Center, where orbiters have been maintained and prepared for launch. NASA requested $89 million for shuttle transition and retirement work in the 2012 fiscal year that begins Oct. 1, but Congress has not yet approved a budget.