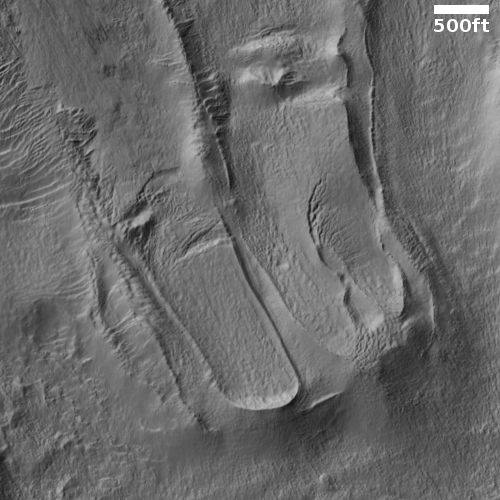 Today’s cool image focuses on one of the weirdest flow features I have yet seen on Mars. The first photo to the right, rotated and cropped to post here, comes from a January 27, 2021 picture by the high resolution camera on Mars Reconnaissance Orbiter (MRO). This cropped section focuses on the middle of three such weird features, two close flows heading downhill on the interior rim of very eroded 28-mile-wide crater. For some reason the flows also have depressions on their crowns. The depressions almost look like someone carved them out with a spackling spatula. In fact, the MRO science team agrees, labeling this image as “Spatulate Depressions with and without Upslope Gullies.”

The second image to the right shows a wider crop of the same picture, and explains the reason for the last half of that label.
END_OF_DOCUMENT_TOKEN_TO_BE_REPLACED

Ingenuity unfolded and ready for placement on ground
April 1, 2021 9:59 am Robert Zimmerman 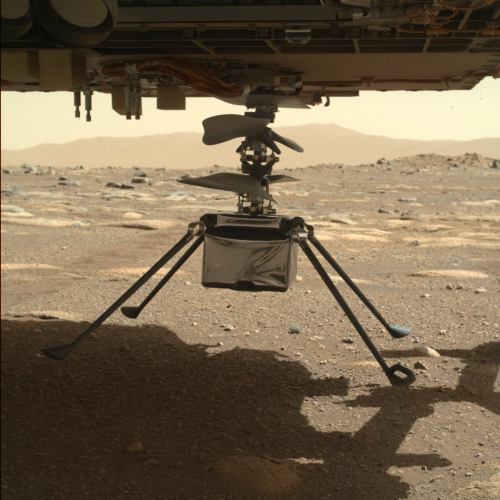 The photo to the right, taken yesterday, shows Perseverance’s Ingenuity helicopter now vertical with its legs deployed, hanging from the bottom of the rover and ready for placement on the ground.

The next step will be drop Ingenuity those last few inches. Once released Perseverance will quickly drive away, as it will no longer be providing power to the helicopter and will instead be blocking its solar panels from sunlight.

Perseverance will then proceed to its lookout post while engineers check out Ingenuity to make sure all is working.

UPDATE: JPL just announced that it is delaying Ingenuity’s flight to April 11th. The announcement was done by a tweet, so provided no explanation as to why JPL decided to delay three days. 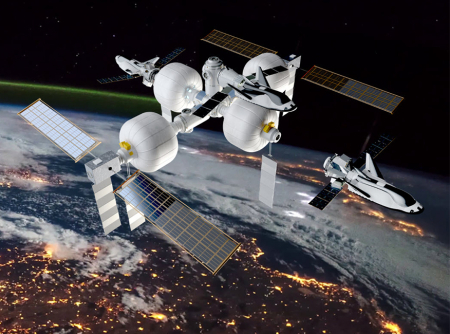 The application to build a spaceport on one of the Shetland Islands has been rejected by a local monument authority because it would cause “extensive and adverse impact on the cultural significance” of a WWII radar station.

Mr Strang [head of the spaceport organization] said he was “greatly surprised” by the decision, claiming HES [Historic Environment Scotland] had “done nothing to preserve the site for the last 50 years”.

Skaw is the UK’s most northerly Second World War radar station and protected as a scheduled monument of national importance. The proposed space centre would be built almost entirely with in the RAF radar station site. It would require the removal of nine buildings, including air raid shelters, guard huts and those associated with the radar system. More than 200 archaeological features, such as foundations of buildings, gun emplacements and bomb craters would also be removed.

The Shetland Islands are very remote with few job opportunities for its residences. Putting a spaceport there seems like an excellent idea, especially because it will create hundreds of jobs where none exist now.

The radar facility did the same, but it did so more than seventy years ago, during World War II. Protecting these old and unused buildings for the sake of those long gone jobs seems utterly foolish.

The spaceport people say they will oppose this decision, but it is not clear from the article what they can do. The law as written appears to give this historical agency full power to veto.

They’re coming for you next: An industry group representing a number of big tech companies like Amazon and Google has written India’s governmental agencies that regulate broadband and space and demanded that they block SpaceX’s Starlink internet service in India.

An industry body representing the likes of Amazon, Hughes, Google, Microsoft and Facebook has written to the Telecom Regulatory Authority of India (Trai) and the Indian Space Research Organisation (Isro) asking them to stop SpaceX from pre-selling the beta version of its Starlink satellite internet services in India. It claimed SpaceX didn’t have licence or authorisation from the government to offer such services in the country. “We request you to urgently intervene to protect fair competition and adherence to existing policy and regulatory norms,” Broadband India Forum president TV Ramachandran said in the letters, seen by ET.

I could have filed this story under my series, “Today’s Blacklisted Americans”. These big tech companies have made it very clear in numerous earlier stories that they do not believe in competition or free speech. They are now demonstrating it again in India. Both Amazon and Hughes are direct competitors with Starlink. Neither also has a product that can compete with it (Amazon appears years from deploying its system and Hughes’ system has latency issues that make it much slower than Starlink). So, they team up with their leftist buddies Google, Microsoft, and Facebook to demand the Indian government do their dirty work for them, shutting down their competition.

It is unlikely that India’s Modi government, which is very much in favor of private enterprise, will do what these thugs want, but you never know. Politicians are like whores, they do what you pay them. If India does move to block SpaceX however I also expect there to be an outcry in that country, as it has many rural areas that can only be served by the kind of service Starlink is offering.