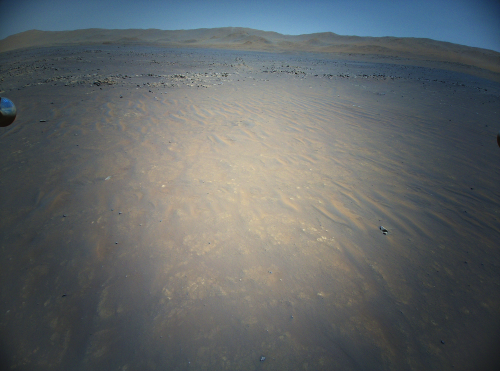 Cool image time! The photo to the right, reduced and enhanced to post here, was the first color image taken by Ingenuity during its 16th flight on Mars on November 21st. The picture was taken about fifteen seconds after take-off, and I think looks west toward the rim of Jezero Crater in the distance.

The flight itself was relatively short, essentially a quick hop about 380 feet to the north to land at the edge of the rough area dubbed Seitah. The team is going to slowly take the helicopter back to its initial landing field, Wright field, over several hops. This was the first.

Capitalism in space: In a video released today, Rocket Lab founder Peter Beck provided the major design details for the company’s new larger rocket, Neutron, planned for launch it appears sometime in the next two years.

I have embedded the video below the fold. The rocket has these innovations:

It appears Beck is specifically disagreeing with some of SpaceX’s approach with this design, using carbon fiber instead of metal, and making the engine simple without pushing its power limits too hard.
END_OF_DOCUMENT_TOKEN_TO_BE_REPLACED

Nissan Motor Co. unveiled Thursday a prototype of a lunar rover co-developed with Japan’s space exploration agency that will employ the automaker’s motor control technology to maneuver across the Moon’s loose terrain. The automaker said it aims to make the rover capable of traversing the undulating Moon surface smoothly by applying technology developed for use in its roadgoing electric vehicles such as the Leaf and Ariya.

The picture of the prototype at the link is, to put it mildly, not impressive. It uses rubber tires, and is really nothing more than a control box attached to four tires.

JAXA apparently also has Toyota working on a competitive project. The competition should therefore eventually produce something worthwhile.

Rocket Lab to attempt quickest turnaround yet on next launch
December 2, 2021 10:26 am Robert Zimmerman

Capitalism in space: Rocket Lab announced today that its next launch of two new BlackSky Earth observation satellites is targeting December 7th, and will thus attempt quickest turnaround yet for the company between launches, 19 days.

It does not appear the company will attempt to recover the first stage of the Electron rocket on this launch. Previous announcements had said it will attempt that recovery on its first launches in ’22.

The European Space Agency’s Mars Express orbiter has successfully been used to relay data from China’s Zhurong Mars rover to Earth and then to China.

In November, ESA’s Mars Express and CNSA’s Zhurong teams carried out a series of experimental communication tests in which Mars Express used this ‘in the blind’ mode to listen for signals sent to it by the Zhurong Rover.

The experiments culminated in a successful test on 20 November. “Mars Express successfully received the signals sent by the rover, and our colleagues in the Zhurong team confirmed that all the data arrived on Earth in very good quality.” says ESA’s Gerhard Billig.

Apparently, normal communications would first involve “handshake” communications between the two, but that requires communications frequencies Zhurong does not use. Mars Express instead had to grab the data on the blind. The test was a success, which means the ESA will likely act as another communications relay for Zhurong, in addition to China’s Tianwen-1 orbiter, as the rover’s mission on Mars continues.

During a telecast on Russia TV, the television host claimed that Russia could destroy the entire American GPS satellite constellation, using its anti-satellite missile technology, should the U.S. or NATO “cross our red line.”

The Kremlin warned it could blow up 32 GPS satellites with its new anti-satellite technology, ASAT, which it tested Nov. 15 on a retired Soviet Tselina-D satellite, according to numerous news reports.

Russia then claimed on state television that its new ASAT missiles could obliterate NATO satellites and “blind all their missiles, planes and ships, not to mention the ground forces,” said Russian Channel One TV host Dmitry Kiselyov, rendering the West’s GPS-guided missiles useless. “It means that if NATO crosses our red line, it risks losing all 32 of its GPS satellites at once.”

The article claims “numerous news reports”, but it appears they all boil down to Kiselyov’s pronouncements on this one broadcast.

No matter. The Putin government is testing the waters, and showing that it is ready and willing to escalate tensions. It apparently thinks the Biden administration is too weak to respond. And who can disagree?

Embedded below the fold in two parts.

To listen to all of John Batchelor’s podcasts, well worth your time, go here.
END_OF_DOCUMENT_TOKEN_TO_BE_REPLACED 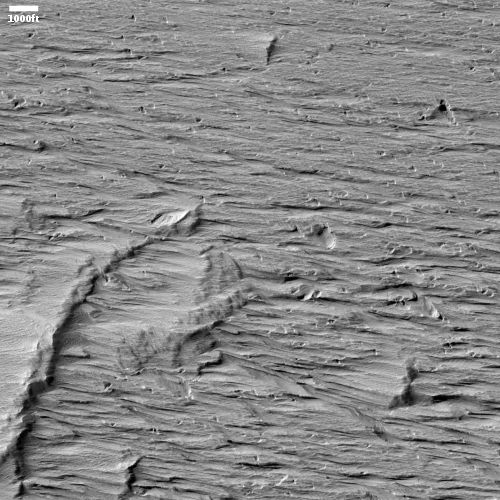 Time for a cool image! The photo to the right, rotated, cropped, and reduced to post here, was taken on September 8, 2021 by the high resolution camera on Mars Reconnaissance Orbiter (MRO). It shows a region of strangely sculptured terrain located several hundred miles south of Olympus Mons.

It appears the prevailing winds are to the west. The question is whether the wind is shaping a hard lava surface, over eons, or is shaping instead layers of dust or volcanic ash quickly and seasonally. At this location either is possible. In fact, we might even be seeing evidence of both at the same time.

The overview map below shows that the location is just outside the Medusae Fossae Formation, the largest volcanic ash deposit on Mars.
END_OF_DOCUMENT_TOKEN_TO_BE_REPLACED