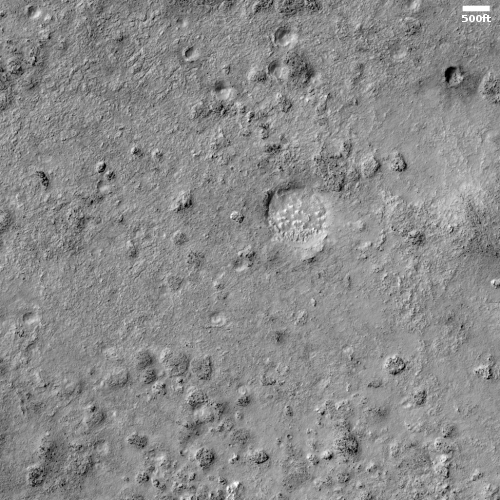 Today’s cool image to the right, taken on January 6, 2021 by the high resolution camera on Mars Reconnaissance Orbiter (MRO) and cropped and reduced to post here, focuses on what appears to be a volcanic bulge on the southeastern edge of the great Tharsis Bulge, home to Mars’ biggest volcanoes.

The terrain gives the appearance of hard and rough lava field, ancient and significantly scoured with time. The bumps and mounds suggest nodules that remained as the surrounding softer material eroded away. The holes suggest impact craters, but their relatively few number suggest that this ground was laid down in more recent volcanic events after the late heavy bombardment that occurred in the early solar system about 4 billion years ago. Since it is thought that the big Martian volcanoes stopped being active about a billion years ago, this scenario seems to fit.

However, the terrain also has hints of possible glacial features, as seen in the large crater-like depression in the image’s center. Below is a zoom in to that crater to highlight the flowlike features in its southern interior. 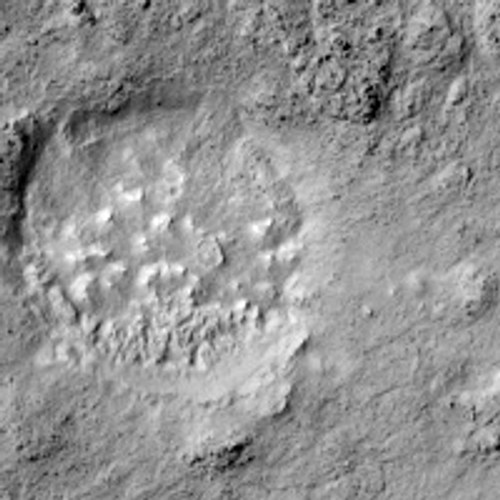 At 45 degrees south latitude it would not be surprising if there were glacial features here. Moreover, some of the impacts in the wider photo above have some resemblance to high latitude northern lowland impacts that look like they smashed into an ice layer close to the surface, melting that ice and causing the crater to have a splattered look.

Questions upon questions and mysteries upon mysteries. It can drive you crazy with a desire to get them answered and explained. At the same time, making up explanations based on limited knowledge is very dangerous. Such hypotheses almost always turn out wrong. We need more data to really explain what we see here.